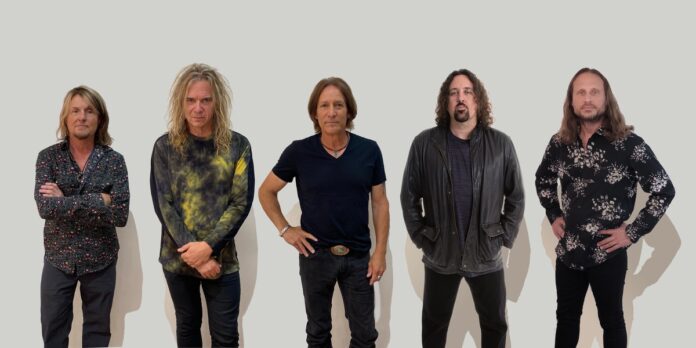 Arc Of Life is a progressive rock group featuring vocalist Jon Davison, bassist/vocalist Billy Sherwood, drummer Jay Schellen, keyboardist Dave Kerzner and guitarist Jimmy Haun. The second album by the quintet, ‘Don’t Look Down, will be released on 18th November, with a first single from it entitled ‘All Things Considered’ available from today.

Davison and Sherwood are both current members of the legendary YES, while Schellen also serves as that group’s live drummer. Kerzner, meanwhile, is known in the prog scene via high profile collaborations with the likes of Steven Wilson and Steve Hackett plus his work with the well-regarded Sound Of Contact, while Haun is best known for his work with Circa as well as YES. The group have pooled their cumulative experiences to craft their own take on the prog genre, with the aim of acknowledging their influences but striving to reach beyond them.

The quintet released a self-titled debut album in early 2021 that certainly pushed boundaries, being creative and challenging, yet ultimately remaining ear-pleasing. Utilising a grandiose and epic approach, repeated plays revealed further layers to its sound. Such is the case again with ‘Don’t Look Down’, a true garden of (un)earthly delights for all prog fans.

Previous article
HE TALKS TO ANGELS
Next article
SISTER ACT