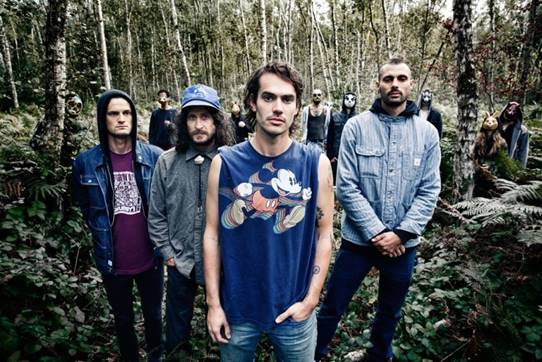 Nashville-based psych-rock quartet All Them Witches have shared a new music video for ‘3-5-7’, the second track to be revealed from their forthcoming album Sleeping Through The War, due via New West Records on February 24th.

Following the lead single ‘Bruce Lee’, ‘3-5-7’ was directed by Robby Staebler – drummer of All Them Witches and artist and photographer in his own right. Speaking of the video, he explains:

“All beings suffer. One of the goals of being alive should be to understand the causes of suffering. For me this video is about perspective and the process of self-realization. Once you begin to see yourself around you and in others, realizing you are a part of everything (even things that you despise) is something you have to swallow and move toward understanding so you can properly adjust. Remember that one song about that one dude who reached for the stars too soon? One of the most important and inspiring things I’ve heard is, “In concentration I will place my mind. For those whose thoughts are slack and wandering are caught between the fangs of their own afflictions”. Or something like that. Those afflictions become everyone’s afflictions. The cycle continues. The suffering continues. Learn to focus, you can do it! I am focused. Eye in focus.”

Sleeping Through The War was produced by Grammy Awarding winning producer Dave Cobb (Chris Stapleton, Sturgill Simpson, Jason Isbell) and follows the band’s acclaimed Dying Surfer Meets His Maker, released last year. The fundamental laws that govern Sleeping Through The War are the same that have made All Them Witches a cult favourite. Big fuzz, deep grooves, cosmic vision. But years of jamming their way across America, and three European tours through 2016 – recently selling out London’s Scala, have made their song craft more dynamic, more responsive, and years of psychic interactions between band members has lead them into a headier sonic space.

The band’s sound on Sleeping Through The War has become so expansive, you can hear echoes of Dr. John’s Gris-Gris, the glacial expanses of Sigur Ros, the stoner sludge of Kyuss, and the meditative om of the East.  “We wrote it in about six days,” says guitarist Ben McLeod.  “Where in the past we would have just gone ahead and written and recorded in the studio, we were like nah we’re going to do it with Dave, let’s be prepared.  It was real minimal; Dave didn’t want us to get too crazy.”  He adds, “we wanted a record you could crank.  And we wanted girl backup singers.”  It might seem like an odd detail, the appearance of the Nashville songstress’s Caitlin Rose, Erin Rae, and Tristen on backing vocals add a classic rock flourish, at odds with their own work, but it makes sense within the context of the songs and within the context of their career. All Them Witches are at their Ummagumma moment, their Bare Trees, theirTres Hombres.  Singer/bassist Charles Michael Parks offered, “We’re trying to get to something better – not necessarily just as musicians – but as people.  I’ve always said that as we change as people, our music changes, that’s why we can never make the same records. I can’t be in one of those bands. I hope you’ll never hear another predictable album from All Them Witches. There’s no art in that.”

All Them Witches will tour North America in support of Sleeping Through The War beginning in Nashville on February 24th.

Sleeping Through The War will be available digitally, on compact disc, and LP and is now available for pre-order here.