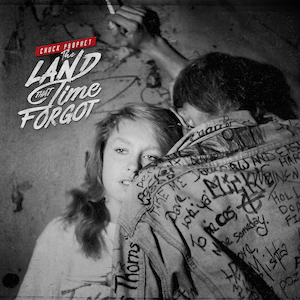 Today, Chuck Prophet shares “Willie and Nilli,” the newest single from his forthcoming album, The Land That Time Forgot, set for an August 21 release on Yep Roc Records.

Described as a “21st Century Exorcism” from Silicon Valley to the White House by the San Francisco native, The Land That Time Forgot was originally inspired by the never-ending gentrification he has witnessed in his hometown.

Having recorded over a dozen albums in the Bay Area, Prophet found himself priced out of his regular haunts and retreated to Upstate New York to record The Land That Time Forgot. Given that distance, he explores the hope, despair and melancholy wonder of his native city like never before.

“America 2.0. The Tenderloin, the TL, the Loin, take your pick,” says Prophet of the new single. “The blighted inner-city nowhere. Here are your kids next door. Beautiful losers, yeah. But there’s a tenderness. With choruses! Sonically it’s rain on a conga drum all the way. With an electric e-bow guitar by James DePrato weaving in and out. An e-bow straight out of Bowie’s Heroes. Jim Goldberg’s black-and-white vérité cover image of the LP brings it home. Settling in for a night of Chinese food, cheap vodka and Metallica on a homemade stereo. It’s a kind of seduction, a prayer even. It’s the best and the worst of times in three verses. With the thumb on the scale leaning toward the best of times. Everyone was young once. Even my folks who incidentally are on the back of the LP cover in my Dad’s Chevy rhymes with levee were young once.”

Produced with Kenny Siegal (Langhorne Slim, Amanda Palmer, The New Pornographers), most of the record’s dozen songs were co-written by Prophet and klipschutz, his longtime collaborator.

Previously released tracks include “Nixonland”, which recalls the Golden State during the Nixon era, “Best Shirt On,” which reflects on current state of events, the driving “Marathon,” which channels the deceivingly joyous dance-a-thons of the Great Depression, and the album’s closing call-to-arms “Get Off the Stage.”

The Land That Time Forgot Tracklisting

Paying My Respects to the Train

Love Doesn’t Come from the Barrel of a Gun

Meet Me at the Roundabout

Get Off the Stage

Previous article
MADE BY MARILLION
Next article
BREATH OF THE REBELS