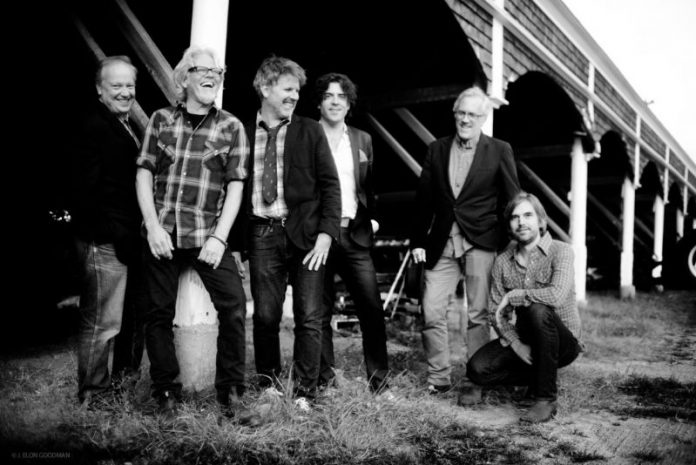 Session Americana are back
Great Shakes, the new album from Session Americana with Jefferson Hamer, makes a bold statement for the Boston-area collective that has been playing together since 2003. Whereas previous albums have harnessed the sprawling familial energy of the group, Great Shakes is a focused reflection of a six-piece version of the band that has been playing together sporadically for the past few years: Billy Beard (drums), Ry Cavanaugh (guitar),Kimon Kirk (bass), Jim Fitting (harmonica), Dinty Child (multi-instrumentalist), and Jefferson Hamer (guitar). While some of the songs on the record will be familiar to fans of the live group, the band also worked on new material together during their weeks-long sojourn in January 2016. Some songs fit together like jigsaw puzzles, with lyrics from one member and music from another, while other songs evolved through conversation and much experimentation. The resulting album feels more like the birth of a band than the seventh record of a collective.

Session Americana is a rock band in a tea cup, or possibly a folk band in a whiskey bottle. This all star band/collective of talented musicians craft a musical experience unlike any other. On stage is a collapsible bar table wired with microphones, a vintage suitcase recast as a kick drum, an old Estey field organ, a pre-war parlor guitar, a mandocello and all of its smaller siblings, a harmonica case fire damaged when Jack’s bar went up in flames and graffitied by Depeche Mode roadies, and an assortment of other instruments that get passed around in this freewheeling modern hootenanny. The anything-could-happen feel of a Session show depends on craft that’s not accidental or easily won; they bring a kind of ease and genuineness to this timeless music, sometimes presenting the latest batch of original songs, sometimes reaching back into depths of the American “song bag”.
Why “with Jefferson Hamer”?
Jefferson brought much more to this than guitar playing and singing, which he has contributed on previous records. He brought songs, recording gear, arrangements, and a whole philosophy. He co-produced and engineered. We thought this record needed to single him out for his role in the process and allow listeners a way to know how much of a contribution he made.
Session Americana  October 2016 Belgium & Netherlands Tour
Sat 15       Tavigny, Belgium         La Truite d’Argent
Mon 17      Eindhoven, NL           Muziekgebouw Eindhoven, Meneer Frits
Tue 18       Oentsjerk, NL            Folk in de Wâlden
Wed 19      Leiden, NL                 Qbus
Thu 20       Terheijden, NL          Witte Kerkje
Fri 21        Amen, NL                   De Amer
Sun 23      Hoorn, NL                  Peticantus
www.sessionamericana.com
www.facebook.com/session.americana
www.twitter.com/SessionAmerican