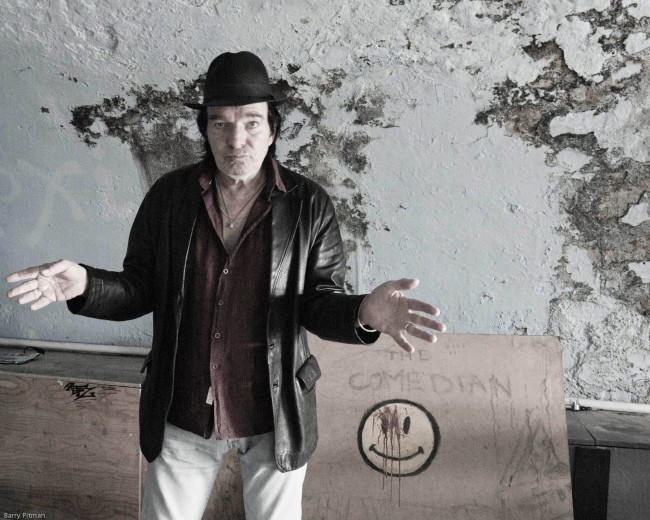 Damned legend is back with a solo album

With British punk pioneers The Damned the subject of a major documentary by acclaimed director Wes Orshoski and about to celebrate their 40thAnniversary next year, the return of original guitarist and founder member Brian James could not have been more timely.
Following on from 2011’s acoustic blues album Chateau Brian and new interpretations of Damned classics on Damned…If I Do in 2013, James returns with his first all new solid rock’n’roll album since 2006. Marrying the twin influences of ’77 Brit punk and Detroit street rock, The Guitar That Dripped Blood is an abrasive, coruscating album of solid garage-rocking guitar anthems; exactly what one would hope and expect from the author of the likes of ‘New Rose’ and ‘Neat Neat Neat’.
Along for the ride are a couple of special guests: Dead Boys legend Cheetah Chrome and Adam Becvare (Black Halos/LustKillers). All wrapped up in a sleeve by noted horror poster artist Graham Humphries, the result is between the eyes trash guitar dynamite!!
Initially released on limited edition blood red vinyl for Record Store Day, this full album release will be accompanied by the release of a limited edition 7-inch of ‘Walkin’ ‘Round Naked’.
A member of legendary punk precursors The London SS, Brian James formed The Damned in 1976 with a string of UK punk firsts – first single and album (both on the legendary Stiff label), major support tour (with T Rex), US tour. They burned bright and fast, before James split to form Tanz Der Youth (replaced on Black Sabbath’s ’78 UK tour by Van Halen – the rest is history!) followed by Brian James’ Brains aka The Hellions. He then hooked up with Sex Pistol Glen Matlock to back Iggy Pop on his North American New Values tour.
In ’82 James teamed up with Sham 69 bassist Dave Tregunna, Dead Boys singer Stiv Bators and Barracudas drummer Nicky Turner in Lords Of The New Church, releasing three albums with considerable global success. James then saw off the 20th Century in supergroup Mad For The Racket alongside the MC5’s Wayne Kramer, Blondie drummer Clem Burke and Duff McKagan from Guns’n’Roses. More recently he’s toured with old Damned buddy Rat Scabies as Scabies-James.
“I didn’t do this to be rich and famous. I started off because it’s the only thing I wanted to do in life, and it still is.”
Release date: 6 November