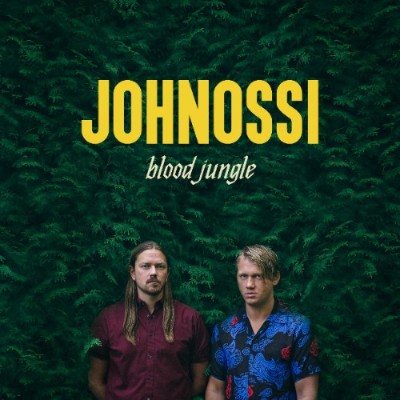 Johnossi have announced the release of their latest album Blood Jungle, out February 17th through Polydor. Platinum-selling superstars with multiple industry awards in their native Sweden – and fast becoming a huge live draw across Scandinavia and Germany –Blood Jungle is the album that sees them step into the international spotlight, with all guns blazing.

It is bigger, bolder, brighter and looser than its predecessors, full of light and ambition. And for the first time, Sweden’s best-kept secret is going global as Blood Jungle is being released worldwide by Universal (via Polydor in the UK). One listen to the album and it’s clear that Johnossi’s time has come – you can feel the hunger for new adventures and the drive to make a great musical leap forward.

Whilst delighting exisiting fans who share their ideals and identity, the new album is an open invitation to a whole new audience to discover what makes these two friends – guitarist and vocalist John Engelbert and drummer Oskar “Ossi” Bonde – so very special.

With the fresh sounds of Blood Jungle, Johnossi are effectively making a second debut, coursing with new electricity in their veins and stepping onto the cut-throat world stage to issue a rallying call to new fans far and wide. The clue is in the title…

“Blood Jungle means a lot to me,” says John, “Some years ago, Ossi and I were on an adventure deep in the Amazon jungle of Peru. We lived with some shamans who put us on a strict schedule – seven ayahuasca rituals in twelve days. I got the feeling that the sap in the trees, the blood in our veins, the water in the rivers – it all flows – it’s all belonging. That’s my feeling behind the title.”

The album finds Johnossi venturing into unexplored territories, embracing new opportunities and working with some of their talented friends from the Swedish music scene for the very first time.

Producers Astma & Rocwell (Tobias Jimson and Michel Flygare) had been big fans of Johnossi’s music for a long time, but had never produced a rock band before. Specialists in the pop and urban world, as well as being members of their own band NONONO, they brought a new way of working to the duo, a new sense of exploration. Whereas previously Johnossi wrote songs, rehearsed them and then went straight into the studio to record, Astma & Rocwell’s pop sensibilities enabled the band to create a new modern soundscape, whilst keeping the core identity of Johnossi intact.

The first sign of this is the lead single ‘Air Is Free’, which is a vibrant, melodic explosion. Before John even opens his mouth there’s the sound of a triumphant brass section and a female choir, things you never used to find in a Johnossi song.

The band have also collaborated for the first time with other songwriters on a number of songs. The album contains their work with Joakim Berg (‘War/Rain’), Carl Falk and Rami Yacoub (‘Weak Spots’), Patrik Berger (‘Blood’), and Salem Al Fakir and Vincent Pontare (‘On A Roll’). Between them they’ve collaborated with the likes of Lana Del Rey, Miike Snow, Robyn, Nicki Minaj, Ariana Grande, Charlie XCX, Ellie Goulding, Avicii and Pink among many others.

“This time around we really wanted to challenge ourselves in as many ways as possible during the process,” says Ossi on the songwritng process, “The people we have worked with happen to be out buddies, but they are also fantastic songwriters and producers, which made it even more fun.”

On Blood Jungle Johnossi have mastered more shades, moods, emotions, colours and flavours than ever before, making a huge statement as they take on the rest of the world with their most expansive record to date.