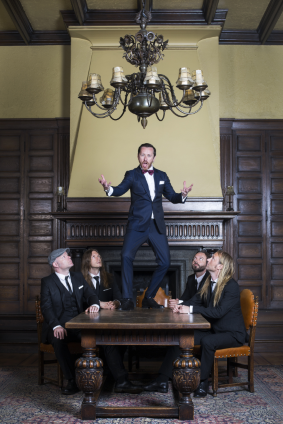 Norwegian metal band Audrey Horne have just released their fifth album “Pure Heavy” and singer Toschie says it was the most fun they’ve ever had in the studio.

Speaking to Maximum Volume Music a few days ago the affable singer told us recording the record was a real uplifting experience: “We just plugged in, all the guys playing live in the studio, it was brilliant to do.”

Toschie said that this was a conscious decision and follows on from the process they underwent before the “Youngblood” record which came out early last year. “Before, we didn’t enjoy the studio so much, guys would come and go and do their parts and it wasn’t as good as when we were onstage.”

Then as they started to record the last album all that changed: “We just looked at each other when we were playing our songs and it was like ‘we are just like a classic rock band now!’ and then everything fell into place.”

The band are on tour this autumn and winter – including dates in London and Manchester in December – and Pure Heavy is out now on Napalm Records.

Look out for a full interview with Toschie, in which he speaks about the band, the band, the record industry and why he will always be a music fan, in the coming weeks