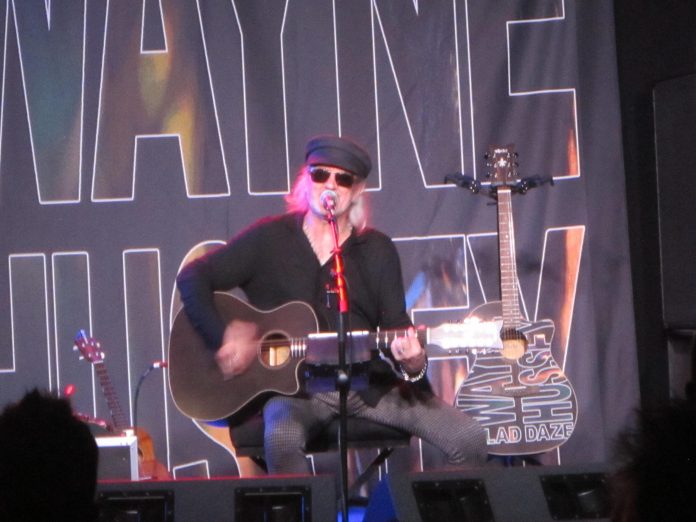 It must be quite nerve-wracking heading out on a fifty-seven-date tour as it has to start somewhere.

That somewhere is tonight in a packed Queens Hall in Nuneaton. There aren`t enough seats laid out as they didn`t expect so many people so there are about another third of the audience standing behind the seats or alongside. There`s no fanfare as Mr Hussey takes his seat on the raised stage and says hello.

I wasn`t quite sure what to expect tonight as Mr. Hussey has an autobiography called `Salad Daze` recently released. The social media sites I visited seemed to think it`d be a question and answer session with a few songs thrown in or a few songs and stories. It was neither.

What unravelled was two hours of songs played on a variety of acoustic guitars, with guitar and backing track or just on piano. I`m sure Wayne Hussey needs no introduction but for those that don`t know, he was born in Bristol, moved to Liverpool and played with Pauline Murray and the Invisible Girls, joined Dead Or Alive, then moved to Leeds and joined Goth rock outfit the Sisters Of Mercy. When the Sisters disbanded, he set up The Mission and has either toured with them since 1986 as part of the band or solo. He now lives in Brazil.

`From One Jesus To Another` kicks us off from circa 1992 Mission, before some lesser known and well-loved tracks such as `Crystal Oceans`, `Severina`, `Nothing Left Between Us` and `Island In A Stream’.

Mr Hussey leaves his guitars and heads to the piano to share an audience request for `Kingdom Come` which he leaves unfinished before performing `Dragonfly` and `Sorry.

The show continues with `You Are Not Alone`, a cover of Bob Dylan`s `All Along The Watchtower`, intricate `Wither On The Vine` and `Butterfly On A Wheel` The show is closed out with the classic `Wasteland` which merges into `Tower Of Strength` with a snippet of Neil Young`s `Like A Hurricane.’

It`s not long before the singer is encouraged back on stage for an encore, where he shares a couple of songs that he`s never performed before with a cover of Mazzy Star`s `Look Away Now` and `Hurt` a song written by Nine Inch Nails Trent Raznor but owned by Johnny Cash.

Again, Mr Hussey is cheered back and returns with singer Evi Vine for a duet of `Sweet Bird Of Passage` and the cracking `Black Mountain Mist` before taking his leave.

I enjoyed the show and it was interesting to witness the first night of a long tour as all the little faults haven`t been ironed out yet and the set seems a little fluid. I`m sure the setlist will be modified each night.

Tonight`s set could have benefited from a change of pace as all the songs offered, seemed the mesh at times. But it`s the first night and I’m sure the show will adapt as it progresses. It`s always good to see an artist such as Wayne Hussey in an intimate venue and especially in a situation where he`s willing to lay his soul bare.