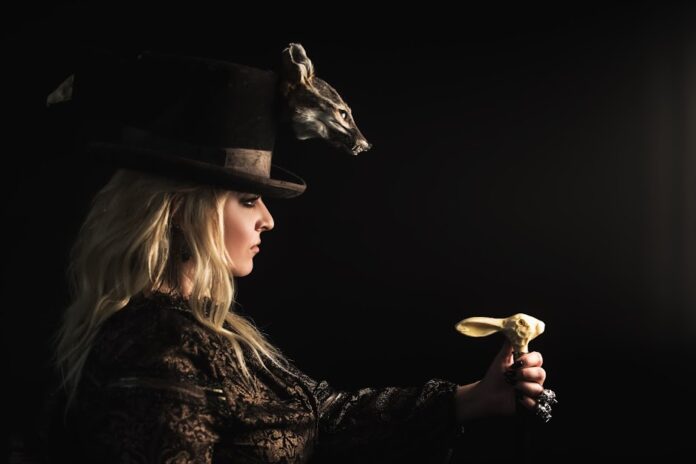 Alternative Rock band Wax on Water, fronted by singer, songwriter and producer Maya Damaris has, in recent years been very much on the radar of music industry insiders both in the UK and the USA. With the addition in 2019 of virtuoso rock guitarist Steven Blessing to its ranks, Wax on Water is now a formidable creative coupling that effortlessly fuses together grunge, electronica, and alternative rock with strings, keyboards and intense guitars to produce a sound that is unequivocally their own. After recently releasing two EPs in ‘The Drip’ series: “The Drip – Part 1” and “The Drip – Part 2” to critical acclaim, the band now return to tantalise fans with the full length sixteen track album ‘The Drip’ releasing on 24th June 2022.

“The Drip” is an eclectic musical brew consisting of sixteen expertly crafted songs that knowingly build upon the strengths and raw visceral energy of the first album ‘Procession’. Drums for the album were played by LA drummer, Garren Orr (YolkLore, Tennis System) and the record was mixed at MooseCat Studios, LA and mastered by Will Borza at the Grammy Award Winning Howie Weinberg Mastering Studios, LA.

The album opens with an intriguing and atmospheric “Prologue” to theatrically set the scene.  “Don’t Bore Us” is inspired by the negative Napoleon complex control freaks to whom we can all relate. “The Sting In the Raw”:  describes that ‘moment’ when you realise the relationship you have valued and nurtured in the hope of a lasting union is, ultimately, doomed.  “Seventh Son” is about reclaiming yourself when something that makes you feel alive spins negatively the opposite way, whilst the classic O’Jays track “For the Love of Money” is an ambitious and intriguing reimagining of the Philadelphia Soul classic.  Electro banger “You Know When You Know” tells of love as a higher power.

The cleverly playful “The Wrong Way” details the perils of vanity, whilst “Dumb Me” is a heart rending and raw exploration of depression. “In The Shadows” talks about the need for loyalty and consistency in relationships and “All Over Me” describes an all-consuming sense of disintegration leading aptly onto the next track “Predictable”:  a track about dealing with one’s own inner negative inner voice. In contrast, the song “Love Won’t Leave Her” is a positive track about anyone and everyone who invests in and aspires to being a decent and loving human being.

The first of the two focus singles from the latter part of this album is the track “How Long?” Written during the pandemic, it isa haunting and beautiful elegy to trusting in your Higher Self and moving towards love. Following this is the structurally unusual track “The Tree“, a blistering guitar driven slice of grunge rock. Lyrically the song is like a stream of consciousnessand is a very deep and personal reflection for Damaris and is her favourite track on the album. She explains:  “.. in essence it is explaining my position on this earth in light of my father’s death, how I dealt with it and how surrendering to a higher consciousness and trust in the higher self supports your own growth.”

“Grinding Skies” is an instrumental that leads us to the album’s title track “The Drip” which talks about the effects of our inner voice and how it can shape or distort your vision of yourself. The ‘drip, drip, drip’ refers to the unceasing thoughts that underpin how we operate in our lives. As Damaris says, ” ultimately it’s about redemption – the whole album is about getting through to the other side, whether that’s getting through the end of a relationship, a pandemic or the death of a loved one. “

Given where we are in the world and its recent existential crises, who couldn’t relate to this sentiment? “The Drip” not only insightfully underscores our collective and individual experiences it also demonstrates the versatility and creativity of Wax on Water in their fearless ambition to weave a potent musical tapestry that is uniquely their own.