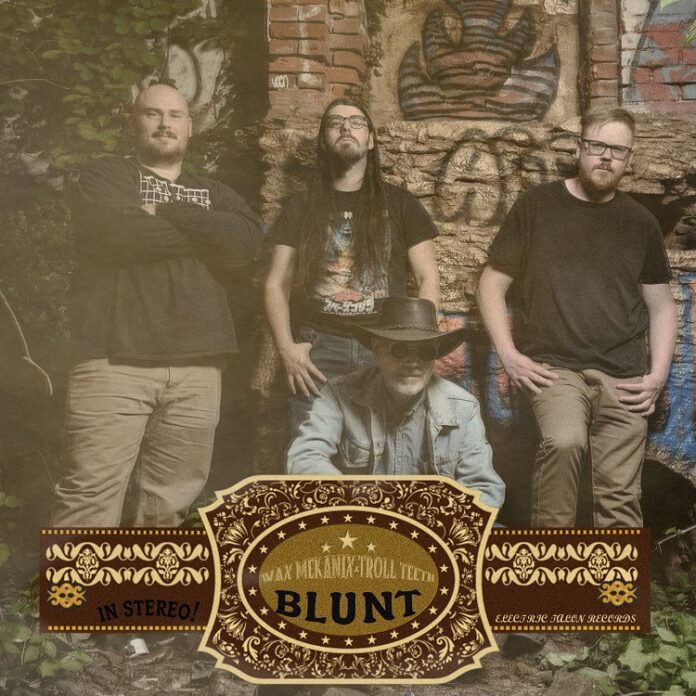 Split EP’s basically rule. There’s something so reassuring about the fact they still exist, some tangible proof that music still matters, and somewhere, there’s people collecting these things in the way we used to.

This one is a suitably bizarre pairing, with MVM fave Wax Mekanix (who sent me this EP weeks ago in truth) and Troll Teeth – a rock band from Philly (always good for bonus points because it was home to Marah, a band that I adored).

That’s the easy bit, because, you see, my boy Wax, he doesn’t do conventional: “If you’re expecting ….me to pander for streams, followers, eyeballs, or likes by calculating some kind of mind-numbing, mouth-breathing sameness, I ain’t your guy.” And that’s precisely the reason you have to love him (note the word “have” it’s not an option).

The brass tacks of his three are that they are a world away from the more metal orientated “Mobocracy” from last year, instead, “Head” (including two of Crobot – Brandon Yeagley who does backing vocals and Chris Bishop who plays acoustic), is built around some Eastern rhythms, some blues guitar and some chanting, as if Yeagley is trying to summon up something from the depths. And it is stunning. “Who told you God was dead?” offers one of its disorientating lines, and there’s something transcendent going on.

The genius – and I use the word with thought – of Wax is shown, however, in the 83 seconds of “Manchester Strawberry Blonde”. Taking us back to that night in North West England when terror descended on music – using what I assume is real audio from the attack – it’s powerful and wonderfully done.

“Blunt” hasn’t finished taking it’s turns though, not by a long shot.

Troll Teeth are not – in all honesty – a band that I was familiar with prior to this. I’d have to question why, however given the mix of prog, stoner and psych that they conjure up. “We tried to get out of our comfort zone a little more than we normally do.” Reckons Moe Eccles, the band’s singer and bass player. If that’s the case, it suits them, and credit to the guitarist Peter Trafalski for the sheer quality of his lead work on both “The Pigs Are on Parade Today” and the even better “Barbs On A Wire.”

The latter has a more metal tinge. Like the 80s haven’t happened, never mind the 21st century and Sabbath still rule the world. It’s as dry as the desert dust that bands like Kyuss and Fu Manchu would let slip through their fingers – but not quite like either. Indeed, as Kyle Applebaum thunders his drums on “….Wire”, you feel they are but a heartbeat away from being a jam band. That they wrap it all up in less than four minutes, is yet more proof that you’re best to quit second guessing anyone hereabouts.

A brilliant EP, indeed, exactly the reason that split EP’s exist. “Blunt” is a clash of styles, but more, it is artists pushing themselves. To put it bluntly as it were, this is for music freaks by people who totally understand that.