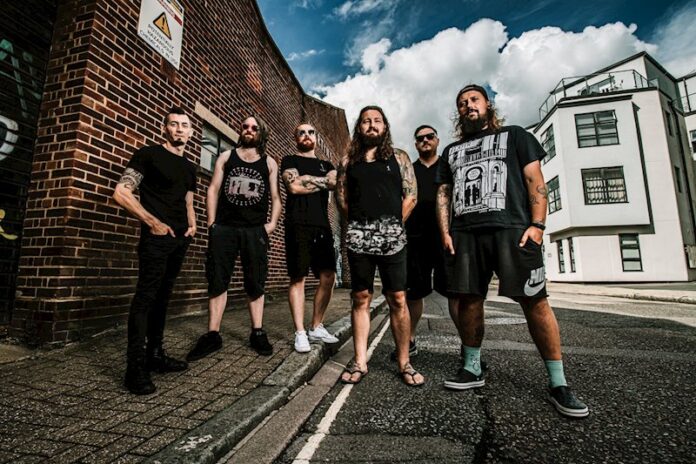 SEETHING AKIRA release their massive new single ‘Something In The Water‘, out now on FiXT.*Explicit Lyrics*

Six-piece nu-metal rockers Seething Akira continue their rampage towards their highly anticipated album NOZOMI with massive new single “Something In The Water.” True to form, the turbulent nu-metal track features thrashing guitars smashed between a blistering rap/rock vocal performance, with provocative lyrics and an explosive guitar solo. “Something In The Water” is about a full-on firestorm of losing control, leading us towards a self-destructive route with no clear view of what the future will hold for us. There is “Something In The Water” and we definitely need to dive in.

“‘Something in the Water‘ is a study into how outsiders can either succeed or attempt to control our hope,” states Seething Akira. “When this protocol commences, the feeling of losing control, like an entity taking over and causing a self-destructive route with no clear view of what the future will now hold for us.”

Explosive. Bombastic. Defiant. Intense. Seething Akira continues to rock on with their gloriously turbulent nu-metal sound towards their next album. Hot off the editorial success of their last album Dysfunctional Wonderland and with recent appearances at the Heavy Music Awards, Tech Fest, The Hammerdown Festival and a recently featured single on the hit Meta Quest VR game Smash Drums with “The Fallen”, Seething Akira is not slowing down any time soon. But the biggest question remains, will we be seeing more of the yellow banana shorts? Catch Seething Akira next at the Ampflied 2022 Festival Sunday, July 31st.

“Something In The Water” is out now from independent multi-genre music label FiXT.

Purchase/Stream: https://found.ee/InTheWater
Explosive. Bombastic. Defiant. Intense. Seething Akira have developed a gloriously turbulent sound that is uniquely their own. Founded by vocalists Charlie Bowes and Kit Conrad, Seething Akira are a 6-piece electronic nu-core band hailing from the seafront city of Portsmouth, UK that have been tearing venues apart across Europe with their powerful fusion of genres since 2012.

The band’s first full-length album, Sleepy Skeletor, dropped in 2018 and made it clear that Seething Akira would be a force to be reckoned with in the years to come. In late 2020, the band launched a series of new singles leading up to their second album, the highly anticipated Dysfunctional Wonderland. With the strength of the band’s music and their popularity with fans rocketing skyward, they connected with electronic rock label FiXT and forged a partnership for their future releases.

At home and on the road, Seething Akira have also put their stamp on staple festivals such as Bloodstock, Victorious, Camden Rocks, and many more while touring with bands like The Qemists and The Algorithm. The band dropped the latest album Dysfunctional Wonderland in late 2021 and are now releasing new singles in mid 2022 in the build up to their new album.

FiXT is the multi-genre, independent record label, founded in 2006 by Klayton (Celldweller / Scandroid). FiXT‘s catalog has garnered billions of streams connecting with a core audience of gamers and cyberpunk & sci-fi fans, and serves a global fanbase in over 150 countries, reaching millions of listeners each month.

Previous article
TIGHT COIL
Next article
ONLY FANS (OF THE DARK)