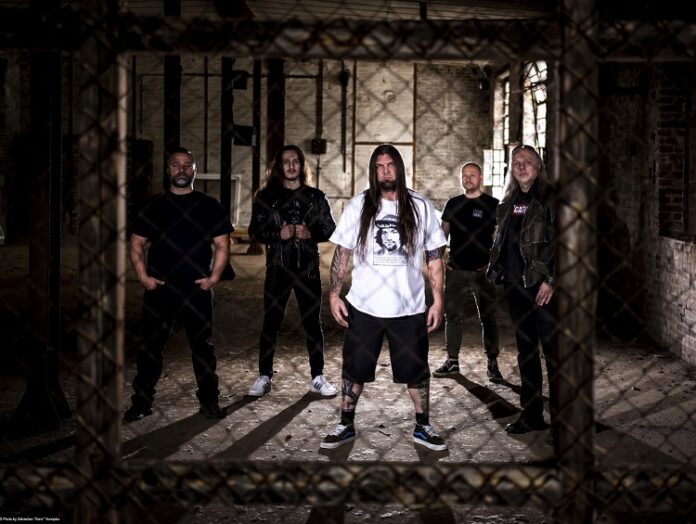 Germany’s Thrash Metallers BONDED have now released their sophomore album Into Blackness. To celebrate the release of the much-lauded record, BONDED have released a music video for ‘Watch (While The World Burns)’, which can be seen here.

BONDED says: “Today, we are excited to launch the new BONDED video, which was once again directed by Nico Schiesewitz / VIZO Films. This might be our best clip yet and we created it for the track ‘Watch (While The World Burns)’, which is the powerful first full song on our second album ‘Into Blackness’. And yes, we just heard the good news that ‘Into Blackness’ entered the official album sales charts in Germany on # 77, so thanks to everyone who supported us and our music so far. We hope you will continue to enjoy ‘Into Blackness’ and hopefully see you all on the road soon!”

BONDED, the group by former Sodom members Bernd “Bernemann” Kost (Guitars) and Markus “Makka” Freiwald (Drums) alongside second guitarist Chris Tsitsis (ex-Suicidal Angels), bassist Marc Hauschild and vocalist Ingo Bajonczak (Assassin), have decided to stick to their guns and once again collaborated with producer Cornelius Rambadt (Sodom, Disbelief, Onkel Tom) at the Rambado Recording Studio in Essen, Germany and also had Björn Gooßes / Killustrations (Aborted, The Crown, Carnal Forge) create the album’s artwork, just like on their critically acclaimed Rest In Violence debut album from 2020, which had entered the official album charts in Germany at # 84.

Previously, a first single off Into Blackness was launched in a lyric clip for ‘Into The Blackness Of A Wartime Night’, to be seen here.

And the album’s second single ‘Lilith (Queen Of Blood)’ can also be seen in a video directed by Nico Schiesewitz / VIZO Films here.

Here is the full track-listing for the album:
BONDED – Into Blackness (45:33)