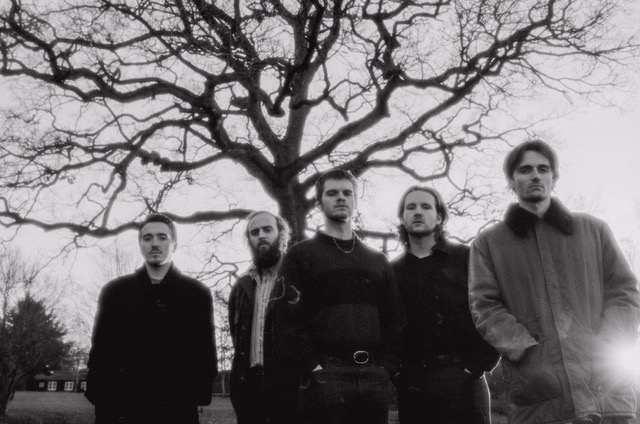 SHEAFS are back with their first music of 2021, the invigorating new single: “Spectator”.

Released on 13th August, Sheffield’s brightest post/punk hopes step-up the stakes with one of their most engrossing cuts to date.

“Behind the face, scenarios no one can see” hisses frontman Lawrence Feenstra in a track that puts humanity’s voyeuristic people-watching habits under a closer lens.

Speaking about the track, SHEAFS say:

“Spectator is one of the most recent songs we’ve written. Even from the roughest of demos, we thought something special and captivating was there. It’s written with the idea of ‘people watching’ and playing the role of a spectator. The idea of looking at someone and not knowing who or how they truly are.”

Written during the first lockdown, “Spectator” is haunted by the shadowy presence of the period; its overarching mood and ominous underbelly palpable throughout.

“Spectator” is the first new music to emerge from SHEAFS since their acclaimed debut EP, “Vox Pop“, which was released in March 2020. Produced by Dead Nature/Spring King talent Tarek Musa and Jonathan Hucks, it was an EP that witnessed a band finding their voice and realising their potential across 4 tracks that confronted frustrations with our consumerist world. Using the pandemic that has elapsed since, SHEAFS have spent the time wisely to plan their next move and laying the blueprint for what is expected to form their long awaited debut album.

Following a hometown appearance at Tramlines Festival in July, the band now look forward to resuming their electrifying duties on the live stage. Picking up their postponed support slots with The Slow Readers Club, SHEAFS will be joining the band on five of their UK tour dates in Sheffield, Liverpool, Nottingham, Cambridge, London and Leeds this Autumn. Full live dates and details below.

SHEAFS are a post-punk five-piece from Sheffield. After a series of demos and unruly live shows saw the band earn a dedicated local fanbase, in 2019 SHEAFS took their sound out across the nation where they won over festivals crowds at Dot2Dot, Tramlines, and won a slot at Madrid’s Mad Cool Fest after coming first in the ‘UK Talent’ section out of thousands of entries. Propelled by consistent support across major national radio stations including BBC Radio 1, BBC 6 Music, Amazing Radio, Radio X and Virgin Radio, the band have also earned press plaudits from essential titles like DIY, Dork, Gigwise and more over the years. Following a stint of high profile support slots with the likes of The Amazons, The Coral, IDLES, Greta Van Fleet and most recently Squid, SHEAFS are now aching to get back on the live stage. Releasing their debut EP “Vox Pop” via Blood Records in 2020, SHEAFS are planning to release a spate of new releases throughout 2021.