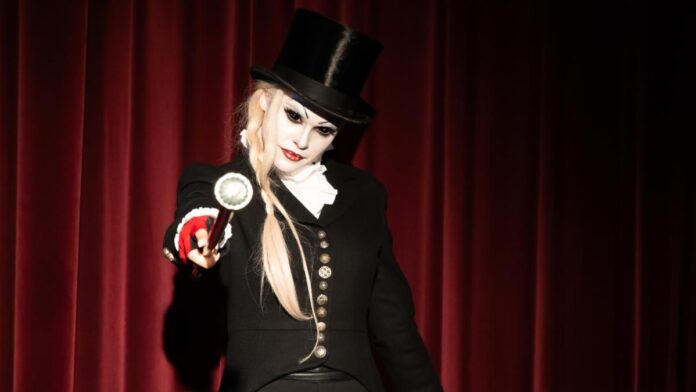 Industrial-tinged and true crime-inspired electronic duo SKYND, who performed to huge festival crowds at Download, Rock am Ring, and Rock im Park over this past summer and is currently on the first headline tour of Europe (selling out dates in Paris, Munich, Prague, Hamburg, Köln, and Berlin), have shared the video for their new single “John Wayne Gacy.”

“The John Wayne Gacy case has been following me all my life,” Skynd offers. “The level of arrogance he had, and how he spoke about his victims — ‘I killed 33, you’re only going to kill me once.’ That arrogance is something that stuck with me through today. He also had this twisted rationale for his murders, where he’d project his disgust on his rape victims and ‘what THEY made him do, ‘and that they deserved to die.”

She continues, “It’s not like Gacy never drew attention from the authorities. A teenage boy told the Chicago police that Gacy picked him up from a bus station and tried to rape him. The charges were dropped when the boy failed to show up — which is logical to me, as he was afraid — to testify in court and the incident seemingly escaped notice from the Iowa Parole Board. If someone would have looked closely, they could have prevented all the murders.”

SKYND is the dark creative outlet and the alter ego of its lead singer, Skynd, and producer and multi-instrumentalist Father. They are known for taking inspiration from inexplicable and brutal criminal cases and the mystery surrounding unsolved deaths, and transforming them into songs to remind us of the darkness within the human psyche.

SKYND released Chapter I in 2018, followed by Chapter II in 2019. Skynd completed Chapter III with the aforementioned “Chris Watts,” which followed the releases of “Michelle Carter” and “Columbine.” Chapter III tallied 31 million views on YouTube and continued their exploration of the darkest and most disturbing parts of the human psyche, following their belief that “those who cannot remember the past are condemned to repeat it.” Special guests have included hip-hop artist Bill $aber and Korn’s Jonathan Davis.

Previous article
ROUND IN CIRCLES
Next article
WRECK THE MIC