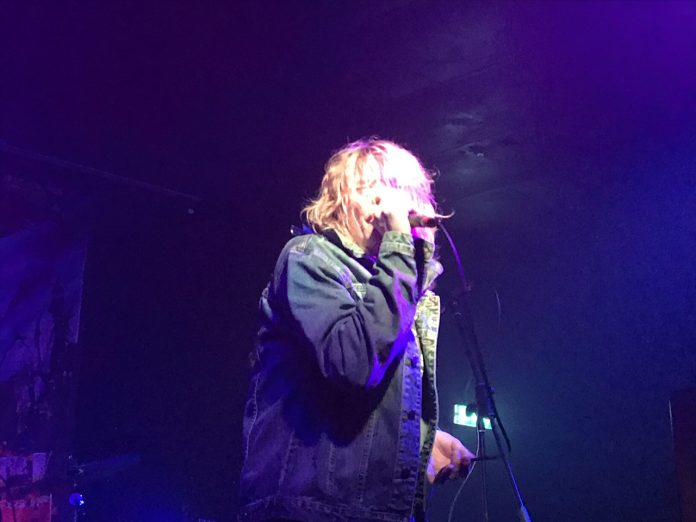 Kory Clarke and the guys get on it

Often MV will write a gig review, and we’ll talk about the “urgency” of what we’ve witnessed.

Whatever you think you’ve seen before, you probably haven’t seen anything like Warrior Soul.

Kory Clarke – a little raspier than he used to be, but wearing a scarf like a rock star – attacks the stage, sneering and with just a hint of violence in the air as he screams “fuck you, I’m the American Idol.”

It’s the lead song on the bands new record, “Back On The Lash” (absolutely one of the albums of the year) and it is the first song they play here too. It is quite a statement of intent given that the crowd is a touch sparse (a combination of the bitter cold, and playing a show just up the road the other day accounts for that) but try arguing with him 90 minutes later when the last strains of the might play out and the five piece disappear with a swirl of feedback.

Aside from a minute of an encore it doesn’t stop – literally. There is no let up, no silence. And above all no chat.

And yet, somehow there doesn’t need to be. Talking in between these songs wouldn’t be right. The four new ones that kick this off are all the proof you need that “…Lash” is a superior WS album (not that any of them are bad) but the majestic “I Get Fucked Up”, the title track and “Black Out” are going to be staples of the setlist for years to come.

The rest of the set doesn’t revisit the new stuff, instead it is a dizzying blur as they cherry pick the wonderful back catalogue – ransacking their own house to pilfer the gems if you will.

The highlights are many. This kind of shiny, glam nihilism only exists in Clarke’s world and only he could deliver these songs. “Bad News (Rock n Roll Boyfriend)” is one that is often played, but there are others that are not. “Rocket Engines” propels things, “Let’s Get Wasted” parties hard- and you best not spill its drink either.

As ever, they don’t forget the classics. Despite being two decades (and more) old “Ghetto Nation” and “The Wasteland” still sound fresh in a way that modern rock will not come 2045. Indeed, who knew how prescient the line in the latter that “Donald Trump is just a money whore” would be back in 1991?

Credit to them too, for not saving that for the encore. Tossed out as if it’s not a big deal (it is!) it gives way to “Punk And Belligerent”, “Charlies Out Of Prison” and “Rotten Soul” before the man who is a born rock star does the rock star thing and encores.

“Jump For Joy” – another oldie – is mighty and Bowie’s “Moonage Daydream” is amped up, ramped up and ready for war. Much like the band themselves.

And if it came to it you wouldn’t want to be on the other side. If ever a band deserved more, then it is the one right here. Warrior Soul, will never again be the next big things like they once were, but there still isn’t a band with more passion for their art.  The whole show is loud, snotty and most definitely not about to apologise to anybody. For anything.