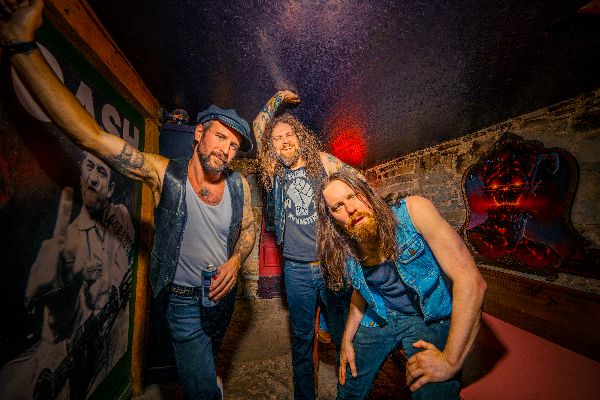 Toronto, ON – JUNO Award-winning rock band MONSTER TRUCK are excited to announce the release of their fourth full-length album Warriors, set to arrive on September 30th via BMG and all streaming platforms (pre-save here).

The 10-track album, produced by multiple GRAMMY and JUNO Award-winning producer Eric Ratz (Arkells, Big Wreck, Billy Talent), is everything you would expect from Monster Truck and more, bringing the band’s signature, riff-driven brand of rock to new heights.

“I think this record was a real eye-opener that we should be trusting ourselves and doing exactly what we feel is right,” said Jon Harvey, bassist, and lead singer of Monster Truck. “It’s an affirmation of our mission statement to have a good time, be respectful, and get out there and party. I think that’s the main theme of this album. It’s about being a warrior in life and fighting for what you deserve.”

The epic instant grat track “Fuzz Mountain” is available now. The lyrics are a testament to the mountain of distortion pedals used to record it.

“Fuzz Mountain was born of the unhealthy love of guitar fuzz through large amplifiers, at punishing volumes. I imagined a little house on a hill where I could sit with all my amps and pedals and just melt my brain. My imaginary holy place. The lyrics and riff came at a time where I would try to daisy-chain fuzz pedals for, sometimes, unlistenable results. Just me, a bunch of fuzz, tune power and a bunch of speakers pushing air in my face. I ain’t never gonna leave,” said Jon Harvey.

The new album will showcase the band’s spectacular, visceral rock ‘n roll trademark sound that’s big-bottomed, badass, and brutally honest in tracks such as “I Got A Feelin’,” “Wild Man,” and “Country Livin’” which features The Sheepdogs Jimmy Bowskill on the slide guitar.

Warriors will also include the recently released tracks, “Get My Things & Go,” a swampy, bluesy rock ‘n roll blast to the face, and “Golden Woman,” a fast-paced, unrelenting jam that marked the first track off the album and peaked at #6 on the iTunes Rock chart in addition to receiving great support across streaming platforms.

In 2011, the Canadian rockers released The Brown EP, featuring tracks that soon became staples on Canadian rock radio and set the stage for their debut full-length album Furiosity. After its release, Furiosity rose to success, reaching #13 on the Canadian charts and leading to a JUNO Award for Breakthrough Group of the Year, and a nomination for JUNO Rock Album of the Year.

Touring in support of Furiosity, the band played high-profile gigs such as UK’s Download Festival, landed supporting slots on the European tours of bands like Vista Chino, embarked on their first headlining tour of the continent, and headed across North America with the likes of Slash and Alice in Chains.

The band continued to deliver new music in 2016 with the release of “Sittin’ Heavy” and hit the road again with over 150 shows over the next 18 months on their own and in arenas supporting Nickelback, Billy Talent, and Deep Purple on their final European tour. They later released True Rockers in 2018, which further cemented their reputation as a hard-rocking band respected by their peers and progenitors.

Monster Truck’s profile has grown substantially in North America, with the band landing headlining slots at Rock on the Range and Shiprocked in the US, and securing song placements for tracks “Sweet Mountain River,” “Seven Seas Blues,” and “Old Train,” which appeared in Ubisoft’s game, Rocksmith 2014, EA Sports’ NHL 13 and the hit TV series, Orphan Black. Additionally, “Righteous Smoke” was featured on EA’s NHL 17, and “The Enforcer” became the ‘goal song’ for The Toronto Maple Leafs.

Over time, Monster Truck has remained true to their core sound while continuously building on that foundation and stretching out, lyrically and sonically. Their ability to do so successfully and satisfyingly has only deepened the impact of their records and grown their audience globally as they gear up to release their new album this September.