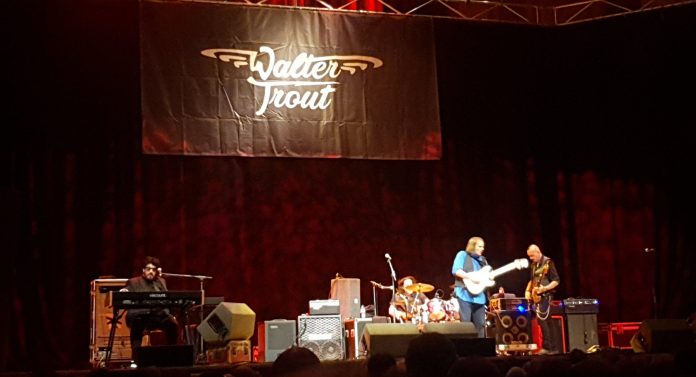 Dan Patlansky, it seems, is fulfilling a dream. “These shows,” he says. “Have been one of the highlights of my career.” Now, of course anyone opening for Walter Trout would say that. But for the South African guitarist, that is both his blessing and his curse. Patlansky, you see, is a superb artist in his own right. His last three albums have proved that, but the last three times I’ve seen him live has been with someone else’s gear behind him. Frankly, he and his band are too good to remain an opening act, hopefully this will change soon. They’ve been in the studio making a new record, and they play one from it tonight. “Soul Parasite” and it does, on first listen appear to continue down the same classy path that “Perfection Kills” managed in 2017. Interestingly, it is one that they have dusted off from the vaults that steals the show, “Big Things Going Down” became a YouTube hit and is now a showstopper too, while elsewhere, work like “Heartbeat”, “Sonnova Faith” and “Backbite” all prove how much there is to offer here. The band – and this really feels like a band with Dean Barrett on keyboards in particularly outstanding form – end with a 10 minute instrumental  , “My Chana” and there is skill here, there is songs, and moreover there is a need for Dan Patlansky to finally make that breakthrough. When most musicians (sorry, but its true….) say these words: “We’re gonna have some fun and jam a while….” The non musos amongst us get our phones out.

When Walter Trout does it, it is one of the most uplifting things imaginable.

Twice he does it here. Once to introduce a pianist, Emma Johnson, who absolutely slays on the already glorious “Gonna Hurt Like Hell” and then, a little later, Vincent White, who takes his inspiration from Jeff Healey, plays his guitar just like him (in every sense) and brings the house down on “Workin’ Overtime”.

The interesting thing about both of these, is not just how talented they are, but how ready Trout is to let them have centre stage, and how much enjoyment is written over his face as they take their opportunity.

He explains why, and in so doing, also shines a light on why he is so superb. “I just love helping new artists, I watch them on YouTube and man, we’ve gotta pass the torch on. It can’t all be Cardi B shaking her ass, or Jay Z telling you about his bling, there’s got to be real music too. Heart and soul.”

Think about that, then think about the two hours Walter and his band are up there doing it. That’s all this is. Right from “I Can Tell” right to the finish. Heart, soul and passion.

A journey through “Survivor Blues” – his last record -from where the wonderful “Me, My Guitar And The Blues” comes, to the deeply personal “Saw My Mama Cryin” and the acerbic “Welcome to The Human Race”, Trout’s guitar, and Teddy “Zig-Zag’s” keyboards in particular, convey emotion which are private, yet somehow universal.

Tour Manager Andrew Elt adds acoustic guitar (“don’t get used to it!” chides Trout) to a lovely “Common Ground” and  “Gonna Fly Away” from the seminal “Battle Scars” record is really given a Southern rock touch here.

A cover of Dylan’s “I Shall Be Released” makes that one his own, it really does, and “Red Sun” another from the “….Blues” record, is right from the top draw.

The encore, though, is a real rabble-rouser. The all-seated crowd is seated no more as “The Best You Got” is attacked with relish. Drummer Michael Leasure laid a stick at John Bonham’s grave today and he channels some of that energy here.

Before he plays it, though, Trout says something which seems to ring out loud, never mind the playing. “Some give a little,” he says, “some give a lot. But you can give no more than the best you’ve got.”

Now, in the five years or so he’s been back on the road, I have been privileged to see Walter Trout many times. Each time I have, a thought has crossed my mind as I left the building: “That’s the best I’ve ever seen him play.” Tonight is no different, and that is astonishing.