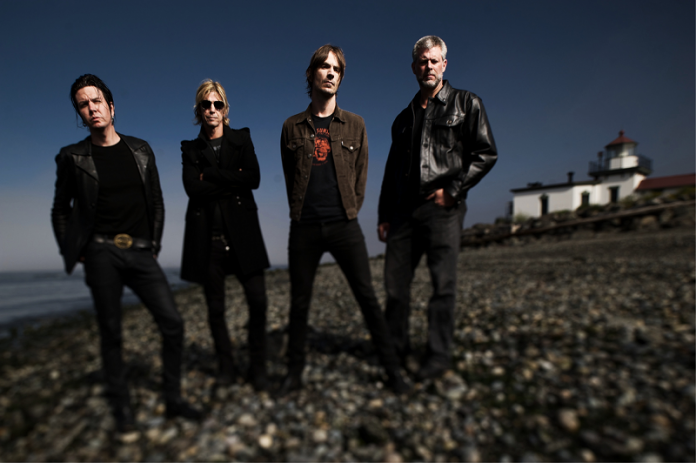 January 9, 2018
Reading time: 6 min.
Facebook
Twitter
Pinterest
WhatsApp
Linkedin
Email
Print
Telegram
Copy URL
By Andy Thorley
Put up or shut up. It’s a mantra many rock bands of today tend to give great lip service to, but often fail to deliver the goods to back up their lofty claims.
The hard-rocking Seattle quartet Walking Papers knows exactly how to forge the sounds that back up everything they want to be as a vibrant creative entity. “There’s no excuse to not be great anymore,” believes WP frontman, guitarist/vocalist Jefferson Angell. “Everyone now has access to everything related to music, right at their fingertips — every recorded sound, endless lessons for kids to learn every guitar lick, and the very foundation of music and where it all comes from. In a weird way, I think that raises the bar for what artists need to do with their own work.”
Indeed, Walking Papers have upped the sonic ante with the lucky 13 tracks put forth on their aptly dubbed second album WP2, which is set for release on January 19, 2018 from Loud & Proud Records. Once again deploying the in-sync production handiwork of mixmasters Jack Endino (Soundgarden, Nirvana, Mudhoney) and Martin Feveyear (Mark Lanegan, Kings of Leon, Queens of the Stone Age), and mastered by Chris Hanzsek, WP2 builds on the promising template of the band’s self-titled 2013 debut, which featured deeply impactful tracks like “The Whole World’s Watching” and “Capital T.” WP2 brings the band into their wholly ascendant second phase with aurally galvanizing statements like the fuzztastic footstomper “Death on the Lips,” the anthemic buildup of “Red & White,” and the delicate yet forceful declarative shuffle of “Don’t Owe Me Nothin’.”
Perhaps the Walking Papers band manifesto is best described via a few key lines from “My Luck Pushed Back,” the driven opening-track dirge that kicks off the whole WP2 ride: “The truth is somewhere in the middle/Yeah, that’s why I prefer the edge.” Angell very much agrees, noting, “I try to incorporate a sense of sarcasm and humility into my songs and the characters who reside in them to show how ridiculous people can be sometimes. But at the same time, in some of those songs, I can be who I want to be in society — a considerate, compassionate, empathetic human being. But not always!” he adds with a hearty laugh.
The true secret sauce of Walking Papers lies within the push-pull collaborative connection between Angell and drummer Barrett Martin (Screaming Trees, Mad Season, and 2017 Latin Grammy producer nominee). “Barrett and I sometimes come at things from different directions,” Angell admits. “There’s some creative tension, sure, but the music benefits from it. If you have an idea and you’re not willing to fight for it, then maybe it’s not that good of an idea in the first place. In our band, everybody has a lot of good ideas that we’re all willing to fight for. Sometimes it’s painful, but at the end of the day, we all feel really good about what we’ve accomplished together.”
Standing one’s ground while in the studio leads to ultimately better song results. “People aren’t shy in this band about letting the others know their opinions, that’s for sure — but that’s also why I think the music we all came up with here is that good,” Angell continues. “There’s a lot of collaboration on the album, but not a lot of compromise. If it’s art, it should reflect a vision that’s taken as far as it can be in order to satisfy that vision. For a song to have made it to the final album, it had to pass a pretty rigid test from the other three people in the band to get there.”
Of course, having a low-end impresario like Duff McKagan (Guns N’ Roses, Velvet Revolver) handling the bass duties doesn’t hurt either. “He’s got so much going on with his other legendary successes that he certainly didn’t have to keep working with us,” Angell concedes. “But I think our grassroots approach inspired him, and reminded him why he got into playing rock ‘n’ roll in the first place. And that in turn inspired us to up our game and keep coming up with better and better material. It’s because of all those things that I think we created something here that’s really special. In a way, I feel like divine intervention stepped in, rather than it being just my personal creation.”
Angell also has a deep respect for keyboardist Benjamin Anderson. “Ben is like the George Harrison of the band,” he clarifies. “He won’t bring in 15 separate ideas, but the ones he does present to us really stand out. He’s an incredible, thoughtful musician.”
The vocalist/guitarist says he’s much more interested in harnessing the impact a fully realized album can have on listeners. “Music is a linear artform, but nowadays, there are those people who just want to come up with that quick fix — and that level of desperation is a repulsive cologne,” Angell observes. “They’re trying so hard to cram everything into those first 30 seconds to get people’s attention, but I think something gets lost at that point. It’s more repellant than it is an invitation. I definitely feel pressured by that sometimes, but I also feel music needs time to spread out and be what it wants to be. The music we’re making is for people who want to take the time to get into a record and give it the time it needs to percolate. We’re not about delivering high-fructose content to chase after those short-term radio hits that ultimately just disappear.”
Angell is willing to acknowledge that sometimes, when you’re in the business of making music, “good enough” is, well, not good enough. “As artists, you should be trying to create new things, and once you do that, you want to move on and try something else,” the songwriter notes. “If you’re merely re-creating something, then you’re just turning out a product. And that’s not what we do.”

Drummer Barrett Martin adds, “This new Walking Papers album reflects the three years we spent on the road throughout Europe, North America, and Australia. It shows a band that has played a couple hundred shows together, and perhaps more importantly, it shows the evolution of our songwriting and arranging skills. Although we’re still rooted in the blues, soul, and classic rock, this album show a lot more musical diversity and exploration in how our songs are recorded and delivered to our audience.”

Forging their creative energy into something new is one of Walking Papers’ ultimate goals. “We’re all standing on the shoulders of giants in some ways,” Angell concludes, “but I feel the songs on WP2 live in their own world.” And just what does that world sound like? “That world sounds very much like Walking Papers. The songs define a sound of their own. If you’re not taking your music to a new place or bringing people directly to the source, then why bother?” Truer words, as the saying goes. With WP2, Walking Papers have inked an indelible sonic contract that guarantees your ears will gladly come back for more.

Previous article
Canadian Folk On Tour
Next article
BAND OF THE DAY: ILSA