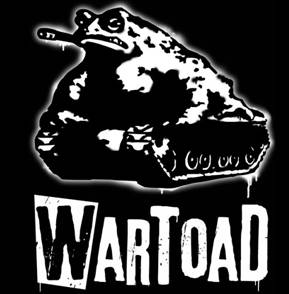 Who are Wartoad and what do they want with us?

We’re not sure, as several of the band are rumoured to be spectacularly well-known rock musicians from the US but have adopted pseudonyms for this, their first release – a riotous cover of Noddy and co’s Christmas staple, Merry Xmas Everybody. Fusing their love of classic punk and rock bands with sleazy keyboard and suitcases full of anarchy, it’s exactly what all members of the family will be singing along to when the Queen’s speech starts. It’s Punkadelic and its not pleased to meet you.

Behind Wartoad is a very serious call to arms which is inspired by the prospect of crippling unemployment across the world in the coming years – lead ‘Toad, Butch Dante explains:

“This unemployment apocalypse – which will cause 65 million people in America alone to lose their jobs, and spike the unemployment rate there from 4.5% today to 55% in 2037 – is being driven by blind enthusiasm for automation technology (predictive analytics, AI, and virtual reality and so on). The Web-scale companies that are developing automation (Google, Facebook, Netflix, Uber, Amazon etc.), and the governments that are in thrall to them, are the enemy. We’re on the side of the tradesmen, the artists, the performers, the apprentices; the meatspace dwellers who work with their hands”

In keeping with this ethos, they are donating money from their singles sales to The Passage, a charity helping homeless people get back on their feet, based in London. Having been spooked by their video, The Passage have refused to have anything to do with them. You just can’t please some people. They’re posting them the money in an unmarked envelope instead. After achieving Christmas number one this year (we assume), Wartoad will reconvene in the New Year to release an album. You have been warned.