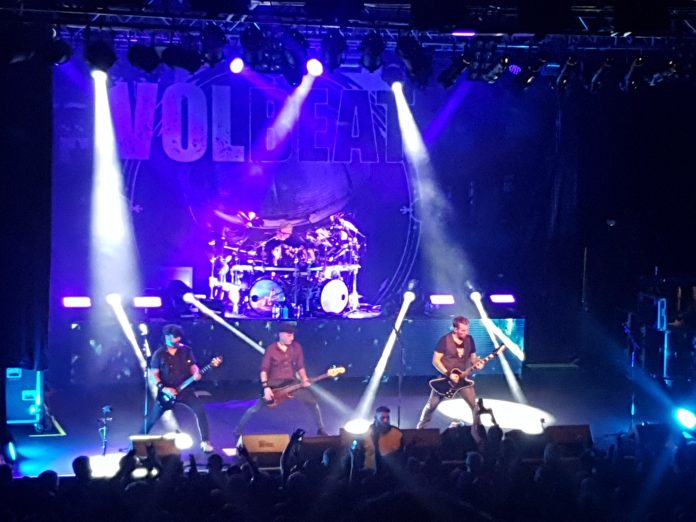 “Anybody can come out on a Friday night, or a Saturday, but only the hardcore” points out Danko Jones at the top of his voice – but then, you kinda think that Danko Jones is the type of bloke that does everything at full volume – “come out on a Monday, in the rain, in late afternoon.” What Danko means, is that he and the rest of his band are onstage at 6.30pm, but the three piece, man, do they ever disappoint? Has there ever been a DJ show that wasn’t lived to the full, at breakneck speed and loud as hell? I don’t imagine there has been. “I Gotta Rock” isn’t just a song title. It’s a way of life. Despite the start time, the place is pretty packed before “First Date” (there wouldn’t be a lot of romance here) is played, while “Burn In Hell” is turbo charged, and by the time he finishes with “My Little R n R” it is difficult not to consider that, whilst every night is probably Saturday night at Wembley Stadium to the fella, that there should really be some parallel universe where Danko was king of rock n roll. 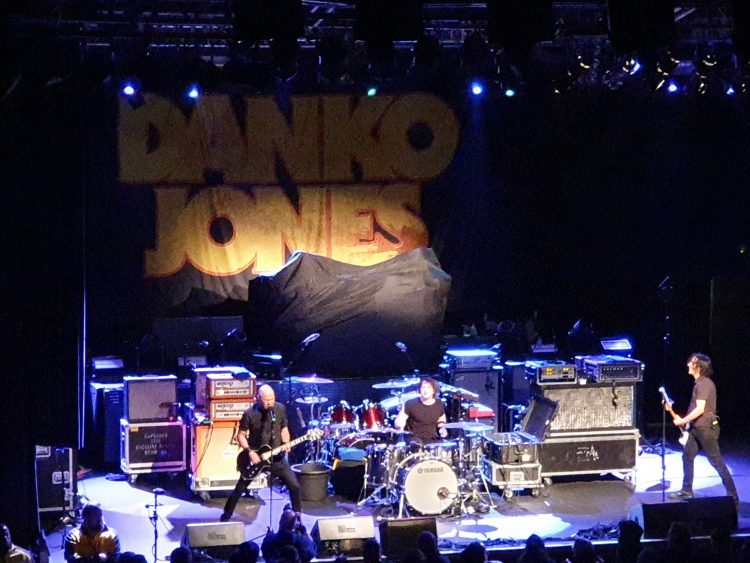 Whatever this bill is, it is one of contrasts, because while everything about the opening band is about bombast and OTT, the exact opposite is true of Baroness. The Savannah, Georgia based group, exist in the shadows, under the radar, doing things in their own way. That has been the case for John Baizeley and his troops in the 12 years since their debut record came out. Whatever adversity has come their way (and lots of it has). Here today, they give a kind of potted history as to why they are so highly regarded. For an hour, they beguile with work like “March To The Sea”, They are expansive, they are challenging and yet too, they can be anything they want to be. The synth heavy “Shock Me” is almost disco. It is staggering, really that they pulled this off at all, yet they really did. Debut stuff “Isak” (and everything about this show is thought out, with a matching light show and well-paced to show all their contrasts) has stood the test of time fabulously, and what is their most immediately, viscerally exciting track “Take My Bones Away” garners a singalong. That’s Baroness, though. They do it on their own terms, yes, but they do it well. 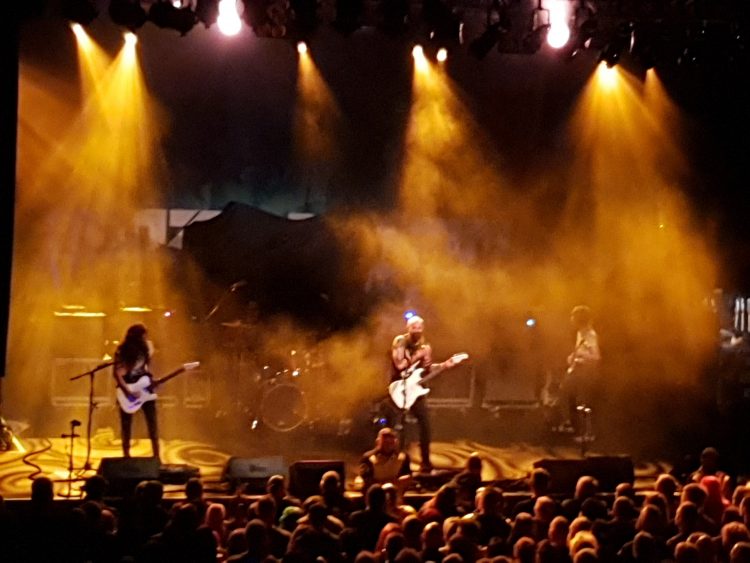 It is six years, give or take 17 days, since I first saw Volbeat live in this very room. I’d been a fan for a while, since hearing tales of this band that was part Metallica, part Johnny Cash and part Elvis. That night, I wrote on the blog I did then: “Volbeat have long been a curious one. Massive all over Europe, genuine arena botherers….”[it is] finally time to crossover into the rock mainstream in the UK.”

I am not often right (you are talking to a bloke that once saw Muse support Feeder 20 years back and told everyone that “they were crap and never be heard of again”. I was half right, I maintain…..) but I was here. This is the last time you will ever see the Danes (and the American, obviously as Rob Cannigio, is still the lead god) in venues that don’t have “arena” as a suffix.

If Volbeat was a football team, this is the open top bus ride, the parade after getting the trophy where the faithful turn out to thank them. That is, at least, how it feels from the off.

Second song in, “Doc Holiday” makes good on those thrash comparisons. Metallica are an influence here, clearly, but then on a different tack altogether, “Lola Montez” is about as singalong as it gets, with the packed crowd going mad.

“Sad Man’s Tongue” comes complete here with Ring Of Fire intro (“all good people like Johnny Cash” offers Michael Poulsen, the frontman who has recovered from illness in time for this) is balanced out beautifully with the top drawer rock n roll of “Black Rose”, featuring Danko Jones, who gives it his all here too.

The set is heavy on their last two albums, which proves they are proud of them -rightly – but also surely that they are a band who looks forward, rather than to the past. One of the newest “When We Were Kids” has already taken on anthemic status, and “Sorry Sack Of Bones” has slotted in with ease.

“Seal The Deal” – the de facto title track of the previous album – is stunning and when they return after “Hallelujah Goat” it is for a lengthy encore. One which begins with a brilliant, “The Devil’s Bleeding Crown”, takes in “Leviathan” – which is genuinely heavy – goes for a knockabout slice of fun with “Pool Of Booze, Booze, Booza”, from the debut record, way back when, and ends with “Still Counting” as ever. And if you are, that’s 11 years old these days.

The reason for mentioning all the encore tunes is simple. That heaviness, those choruses, that nod to their history, but that willingness to look forward, encapsulates all they are about. They are Volbeat, and this is their time. Finally.

Previous article
READ ABOUT CREED
Next article
BAND OF THE DAY: BLOODHOUND