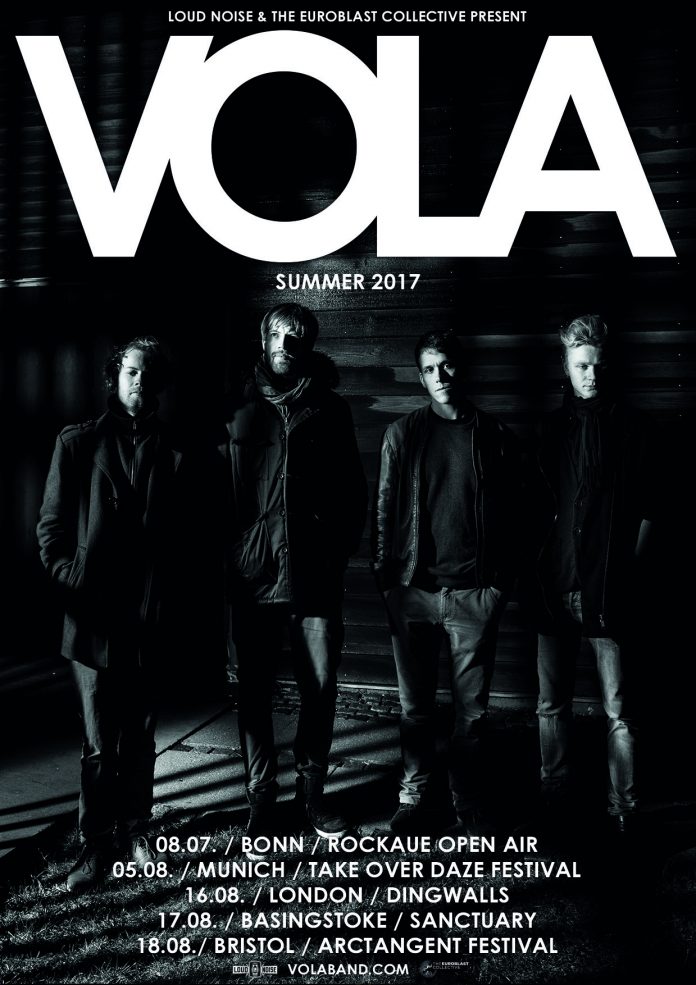 Danish genre-mashing quartet VOLA will be returning to the UK this summer playing two headline shows at Dingwalls in London and the Sanctuary in Basingstoke as well as Bristol’s ArcTanGent Festival alongside Explosions in the Sky, Tesseract, Converge, Sikth, Future of the Left and Heck.

The band released debut album ‘Inmazes’ late last year which is a musical journey into the mind in pursuit of happiness, set to a mix of 70’s progressive rock, modern day electronica and industrial, topped off with clear, beautiful vocal lines.

Following rave reviews from The Sun, Metal Hammer, Prog, Rock Sound, Powerplay and more they embarked on a September – November European Tour with Katatonia which blew away fans across the continent and fans can expect more from their magnificent waves of djenty majesty.

At times futuristic, the music of VOLA has references to tech-prog and pop as guitarist/front man Asger Mygrind touches on the band’s influences: “I’ve always been a big fan of bands like Opeth and Porcupine Tree, and they write very dynamic songs, so I think the influence to explore dynamics and moods came from that place initially.” Then again, he admits, he is influenced just as much by just the opposite: groove-based, monotonous music. “Some big influences of heavier music are Devin Townsend, Soilwork and Meshuggah. But it doesn’t have to be metal at all as long as it has a spectacular beat, groovy odd-time groupings, an interesting mood or something else along those lines.Massive Attack‘s 100th Window is a big influence. It’s monotonous but it still feels like it’s constantly evolving. Steven Wilson‘s Insurgentes and Ulver‘s Shadows Of The Sun both have a darkness that we find very fascinating.”