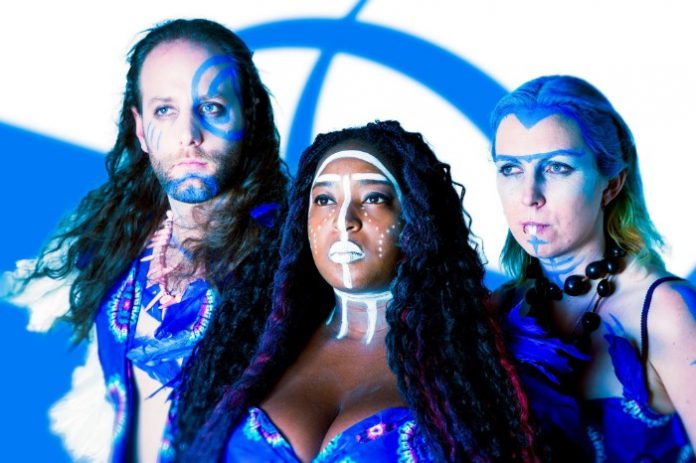 Today, London mystical-power trio Vodun have announced details of a UK tour, scheduled for this coming September. In the wake of the release of ASCEND, the highly-anticipated follow up to 2016’s revered ‘Possession’ album, Vodun will be taking their ground-flattening, groove-inflected rock power across the country to bring ASCEND alive and aloud.

Released September 7th through New Heavy Sounds, ASCEND is unabashedly revolution music, its ten tracks a hurricane of mystic heaviness, spiritual soul and furious positivity, its colossal riffage & rhythms allied to inspirational lyrics and powerful melodies to deliver food for the soul and fire to inflame uprisings. At heart, it’s an album of musical celebration, and heavy playfulness – lyrically of resistance, and of solidarity.

Driven by the afro-inspired dervish drums of Zel Kaute (interpreting the spirits of Ogoun), the roaring, fierce chromium guitars of Linz Hamilton (The Marassa), and fronted by the fire-breathing howl of frontwoman Chantal Brown (Oya), delivering you the truth of generations with a drive and focus that can’t be matched.

ASCEND builds upon the foundations laid down by the London-based group’s 2016 debut, Possession – the music is more sophisticated, the canvas broader, the details more vivid and varied. Their palette now embraces a healthy does of extra percussion, saxophone, and vocal arrangements that pair Chantal’s behemoth holler with harmonies, chants and howls, a full-spectrum of sound that suits their polymorphous attack.

Go and see Vodun come to life at the following dates in September 2018: