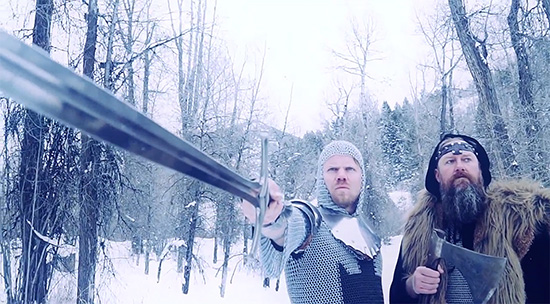 Salt Lake City Utah’s Visigoth released their debut album The Revenant King last week on Metal Blade Records. In conjunction with the release the band has partnered up with Bloody-Disgusting.com for an exclusive premiere of the video for the title track The Revenant King. Check out the stream of the Dave Brodksy directed clip at bloody-disgusting.com.

Visigoth talks about the process of shooting the video: “This video was made in true DIY fashion. Almost all of the props and costumes were provided by us and our friends, and the actors in the narrative portion of the video are actually all friends of ours (Jason Stock, who plays the Usurper, works at the Wasatch/Squatter’s co-op brewery with our drummer Mikey and can be seen on the bottle label for Hop Rising, the Squatter’s signature double IPA; Jason Tarpey, who plays the King, is not only a good friend of ours but is also the singer for Eternal Champion, one of my favourite current US heavy metal bands; and Paul Black, who plays the Advisor, is a good buddy of ours and is the vocalist of local Salt Lake City metal band Turned to Stone). The outdoor shots were filmed in Oakley, a small rural mountain town in Utah. It was frigid cold out when we shot the narrative portion – Jason T’s chainmail was freezing onto his skin by the end of it! The band performance shots were filmed in the Wasatch Brewery warehouse with nothing more than a minimal lighting rig and a fog machine provided by our buddy Brock Grossl (who used to play in Salt Lake City’s now-defunct speed metal maniacs Castleaxe). Of course, none of this could have been realized without the immense talents of filmographer David Brodsky his partner in crime Allison Woest, it ended up looking much better than any of us were expecting! Their skill behind the camera and Brodsky’s keen eye for editing are what really brought the project together. Without further ado, we hope you enjoy our little swords & sorcery offering. Cheers!”

Visigoth plays heavy metal that hearkens back to the golden age of ironclad riffwork and powerful vocals. They pay tribute to the titans of steel that left their mark on the history of the genre, and their earth-shaking sound echoes with a deep reverence for their roots. Visigoth goes above and beyond mere imitation, making their own musical mark on the genre they lovingly embrace. InVisigoth‘s realm, there are no frills, no gimmicks; there is only heavy metal.

The band’s brand of heavy metal fit perfectly within the ranks of Metal Blade Records, who brought the band on board to release their debut full-length album. After signing with the label,Visigoth recorded The Revenant King. The collection of heavy metal tracks was engineered, mixed, and produced by Andy Patterson at Boar’s Next Studio in Salt Lake City. Alan Douches at West Westside handled mastering to offer a final product that truly represents the finest in true metal.

On The Revenant King Jake Rogers’s powerful vocals lead the charge, and when combined with the twin guitar attack of Leeland Campana, Jamieson Palmer, and the rhythm section of bassist Matt Brotherton and drummer Mikey Tee, form an immensely potent traditional heavy metal attack that fans of the genre would be unwise to ignore!

Visit http://www.metalblade.com/visigoth to pick up a copy of the album. You can also order the CD HERE and a special bundle package including a t-shirt HERE.