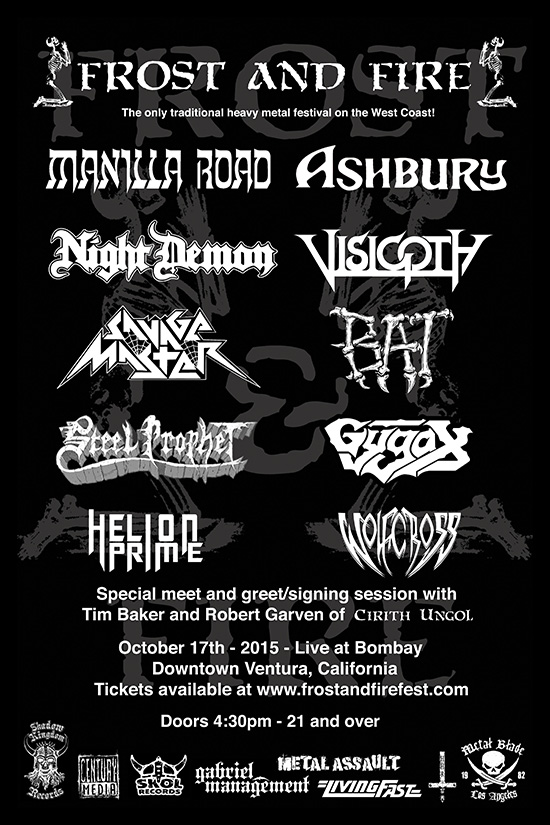 Visigoth will be performing in southern California in October for a true heavy metal festival that is not to be missed. The Frost and Fire Festival is scheduled for Saturday, October 17th at Bombay Bar and Grill. Tickets and information, including the full lineup, can be found online atfrostandfirefest.com. Tickets are also available at Salzer’s Records in Ventura, CA, and Headline Records in Los Angeles, CA. Metal Blade, Hell’s Headbangers, Century Media, Shadow Kingdom Records, and Skol Records will all be in attendance with giveaways for attendees. Metal Blade Records will also be selling classic and limited vinyl and CDs at the event. Members of Cirith Ungolwill also be in attendance for a meet and greet!

Visigoth comments on the upcoming festival appearance: “We are extremely excited and honored to share the stage with colossal metal titans Manilla Road, majestic hard rockers Ashbury, and some of the best new heavy metal bands out there at the only traditional heavy metal festival on the west coast. The crushing lineup and beautiful seaside location make this a must for fans of heavy metal worldwide. We’ll see you in Ventura!”

For out of town guests, the festival has secured a discounted rate at the Clocktower Inn (three blocks from the venue). Just mention “Frost and Fire” upon booking to receive a reduced rate for your hotel stay the weekend of the festival. Book now HERE.

Visigoth plays heavy metal that hearkens back to the golden age of ironclad riffwork and powerful vocals. They pay tribute to the titans of steel that left their mark on the history of the genre, and their earth-shaking sound echoes with a deep reverence for their roots. Visigoth goes above and beyond mere imitation, making their own musical mark on the genre they lovingly embrace. InVisigoth‘s realm, there are no frills, no gimmicks; there is only heavy metal.

Watch the video for “The Revenant King” now on YouTube HERE and visitmetalblade.com/visigoth to pick up a copy of the album.

“Visigoth have +3 guitars enchanted to increase their chances of scoring a critical riff.” Metal Hammer

“Visigoth could have easily been selected to participate in their tremendous Metal Massacre series.” About.com