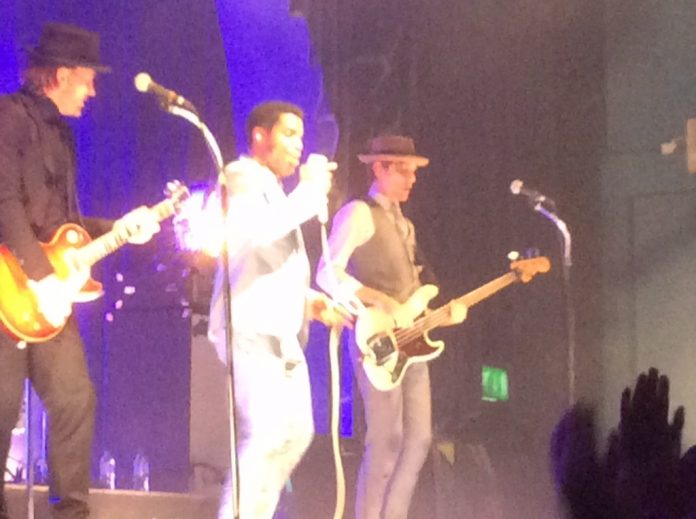 It started, no doubt, with the best of intentions. Slydigs guitarist Louis Menguy, is explaining where the band will be selling their Merch, and is trying so hard to be pleasant. “Even if you don’t buy anything we’d love to meet you”, he offers. “Actually, just buy something” interjects four stringer Ben Breslin, “we’re fucking skint. Fuck niceties…..”

The bigger point is this: why anyone wouldn’t want to buy something, anything, that’s for sale, is open to debate, because the Warrington four piece are quite superb here. Rock n roll done right, and tracks like “Till The Morning Comes” are just sleazy enough to retain basic primal instincts – and they are evident too in singer Dean Fairhurst’s throaty roar. “To Catch A Fading Light” – played acoustically – shows a more tender side, but it seems that their heart lies in the stomps like “Stiff Upper Lip” and closing “The Love That Keeps On Giving”. In amongst all this, they are able to call Nalle Colt, from tonight’s headline act, onstage for a medley of “Hey Joe” and “Whole Lotta Love” and if this proves they know their history, the rest shows Slydigs have a bright future.

Let’s not beat about the bush here, there are other distractions tonight. Now, if advertisers are to be believed the world is made up of people that want to watch football while cashing out their bets, eating some kind of crisps and drinking lager.

Explain the fact, then, that here tonight – at precisely the time England were losing to Iceland- the Assembly is packed. Now either advertisers are wrong, or the band that are playing live are so good that no one wants to miss it. Watch Vintage Trouble and there will be no doubts about it. For 90 minutes they are quite simply incredible.

MVM had seen them support The Who a few years back, and they were good then, in the intervening years, they’ve honed their act and are as good as anything out there.

Much of the spotlight – and you’d imagine he loves that too – will fall on frontman extraordinaire Ty Taylor, he wasn’t deemed good enough for INXS all those years ago, now he’s a force of nature. A preening, prancing, dancing, blue suit wearing, rockin’ and rollin’ star of any show, but who, in their breakthrough hit “Blues Hand Me Down” is happy to crowd surf from the back of the venue to the front, before that he’d handed cakes to the crowd in celebration of drummer Richard Danielson’s birthday.

Essentially though, Taylor can do whatever he pleases because he’s astonishingly good. Add the antics, the presence and the will to the fact he has an incredible voice, and you begin to understand just why VT are destined to be huge.

The four piece meld soul, rock n roll and blues better than anyone has since Southside Johnny, that’s abundantly clear right from the off of “Run Like The River” and “Nobody Told Me”. There’s a new song too “Can’t Stop Rolling” and it suggests that the upcoming album is going to be a belter.

In amongst all this there’s a medley of songs – one of which is a snippet of the Credence Clearwater Revival like “Angel City – and when you think that this band has only been going five years to have this many great songs verges on the ridiculous. There’s also a gorgeous soul filled ballad “Another Man’s Words” and the outright defiance of “Not Alright By Me” and there really isn’t any end to their talents.

“Nancy Lee” struts and “Pelvis Pusher” drips with sass, but there’s more here than that, there’s a total mastery of their craft for sure, and there’s a drive and steely determination amongst all the smiles that tells you Vintage Trouble know what they want and, well, they know how to get it.

Their career is guided by Doc McGee, the man who made Bon Jovi the biggest band on the planet in the 1980s. With that muscle and their raw talent expect to see Vintage Trouble in an arena near you – and not as the support act – sometime in the next five years. Their hard work is paying off.