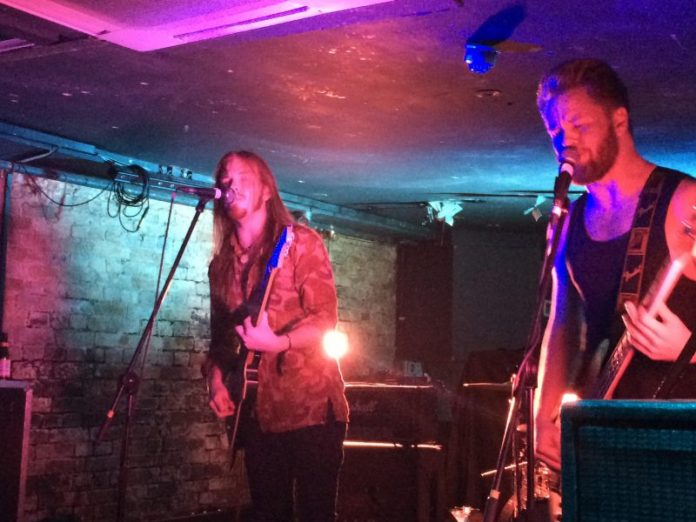 Tonight the music seems so loud……

Hakim Krim only wanted to educate. The man with the best facial hair music ever seen (with due respect to Stevie from Bad Touch and Billy Gibbons) only asked a simple question. “We are from Sweden. What do you know about Sweden?” The only reply from the throng in the basement of this pub in a scruffy arsed part of town came from a lady just in front of MV: “You have good recycling…..”  In truth, even without the moustaches there is lots to like about the foursome. If you asked them,  surely even they’d say there is nothing original about their brand of rock n roll, but crikey it’s fun. Lots of fun. More posturing than The Scorpions on Strictly Come Dancing, this is essentially a mash up of Iron Maiden, AC/DC and Thin Lizzy, and since they are three finest bands on the planet then, yeah, bring it on. Lynott and the lads would like “No Regrets”. Angus and the boys might enjoy “Onkalo” (which has the added bonus of a bubble machine) and the spectre of Maiden isn’t far away throughout, but is absolutely central to “History Repeates Itself”.  This is no mere awful Steel Panther type pastiche, mind you, and the new one sounds like The Hellacopters used to, and “Hammer To The Heart” is a damn fine metal song. This is Dead Lord’s first trip to the UK. Their first ever show here was cut short as they were late. Bang on time here and bang on their game, they more than lived up to their promise to “rock you with our rock”.

The Vintage Caravan – appropriately for a band with that name – just give off the appearance of a three piece that lives for being on the road.  Another band who doesn’t over complicate things, they instead merely give an hour long study into the almighty power of the mighty riff.

There’s a moment early in the set where they lock into a groove in “Babylon” and it all makes sense.  Óskar Logi is a wonderful guitarist, an avuncular frontman, and with his grinning right hand man Alexander Örn on bass, you sense that whilst they deserve every little bit of success they get, the trio would still so this anyway. More varied than the support, “Innerverse” is a fine bluesy ballad before cutting loose, “Crazy Horses” (not that one!) is a monolithic stoner affair and “M.A.R.S.S.W.A.T.T” is a party song. And as if to exemplify the fact they are just here for a good time, the snippets of The Doors and Led Zep you might expect, the bit of “Careless Whisper” you may not.

Slabs of classic 1970s rock wrapped up in psychedelics and blues are what they mostly trade in though, and “Carousel” (“not that I’m bragging but this has got a bass solo” grins Alexander before it’s start) is a fine example of the ideas here, while the last two “Last Day Of Light” and the twists and turns of “Expand Your Mind” are as good as it gets.

A Monday night in the November cold really shouldn’t be this much fun, but maybe it is like  Óskar Logi said: in the world of The Vintage Caravan, every night is Friday night.