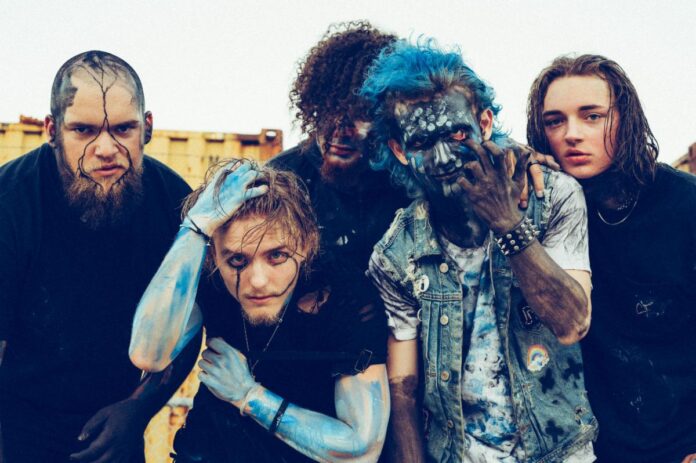 Des Moines’ firebrands, VENDED have revealed a new video for crushing new track, ‘Overall’, which you can stream here or watch below.

“Overall is a song about getting trapped in your own head and having your thoughts self-sabotage you. And how sometimes YOU are the only person who can help yourself get out of that headspace. “I salt the wound myself” has a double meaning; you either feel the pain from bad thoughts, or you lean into it and embrace them.”

The five piece spent their summer on the European summer festival circuit, rocking a capacity house at the UK’s BLOODSTOCK festival, where they shot the video for ‘Ded To Me’, then closed out September back on US turf for a string of shows with IN FLAMES and FIT FOR AN AUTOPSY, as well as sets at Aftershock in Sacramento and Louisville’s Louder Than Life.

The band have hit the road once more, this time with Ukrainian metal squad, JINJER.  Tickets are available here. Later, this December, the band head to South America for the first time, to Hell And Heaven Fest in Mexico City, and three massive KNOTFEST events in Bogota, Colombia, Macul in Chile and Sao Paolo, Brazil.

Check out the new video, directed by Derek Rathbun of Derek Films below.

Late last year, the band dropped a pair of singles (‘Asylum’ and ‘Burn My Misery’) ahead of their 5-track debut EP, ‘What Is It / Kill It’, recorded with Griffin Landa of The Acacia Strain. The two singles bookended their first US headline tour, after which the band went on to open proceedings at KNOTFEST LOS ANGELES at the Banc Of California Stadium, playing alongside SLIPKNOT, BRING ME THE HORIZON, KILLSWITCH ENGAGE, FEVER 333, CODE ORANGE and CHERRY BOMBS.

VENDED‘s fresh and furious sound heralds a new era of heavy music and the arrival of the next generation of brutality. Formed in February 2018 by Cole Espeland (lead guitar), Griffin Taylor (vocals), Simon Crahan (drums), Jeremiah Pugh (bass) and Connor Grodzicki (rhythm guitar), VENDED showcase a barbarous sound built on foundations laid by the power and precision of the rhythm section, layered with vicious guitars, soul crushing solos and guttural-yet-melodic vocals portraying the hardships and harsh realities of life.

Stay tuned for more coming from VENDED very soon. In the meantime, catch them live at any of the dates below. Tickets available at OfficialVended.com.