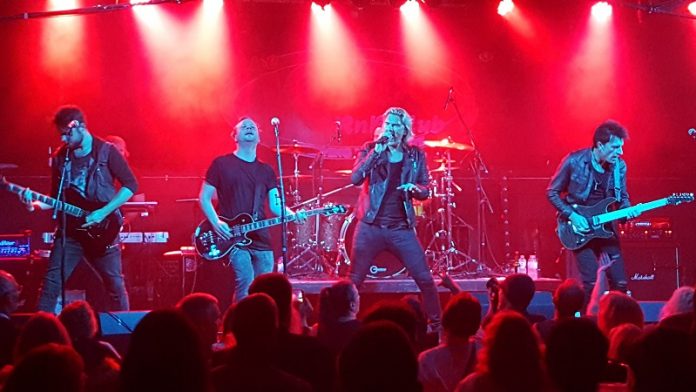 Keith goes mad with the Vega Boys in Bilston

Way back in December 2014 I ambled into the Slade Rooms with friends to see Joe Elliott’s Down ‘n’ Outz and eschewing the bar we headed straight into the main room just as the support band hit the stage.  The ‘Vega? Who?’ conversation was cut short as they opened with ‘Kiss of Life’ and much to our surprise I recognised the song and twenty minutes later I was a fan.

So here we are on the first night of a new tour, which in Nick’s own words has been six months in the making, with a new drummer after Dan jumped ship for pastures new. Opening with what has become a classic crowd pleaser, ‘Hands in the air’ it does just that. The crowd love it and it’s quickly followed by Stereo Messiah with Nick checking (for the first of many times tonight) the ceiling height before jumping from the drum riser. His voice throughout the night sounds so much better than it did when supporting FM and soars above the lush keyboards and guitars.

When you’re four or five albums into a career it must be easy to fall into the trap of only playing (home) crowd favourites but that’s not the case tonight. ‘Every Little Monster’ and ‘Ignite’ are first timers to the set whilst ‘Ballard Of The Broken Home’ gets its second outing.  They fit in seamlessly and quite honestly, it’s hard to see why they haven’t been played before, but when you have this many songs, 90 minutes wouldn’t be enough.

Nick calls a young lad called Kyle from the audience onto the stage. Now Kyle has been posting YouTube clips of himself playing Vega songs, so he’s handed a guitar and off they go into ‘What the Hell’.  Far from looking out of place he handles it admirably though Marcus still steels the show with the solo and as Nick comments at the end it could have been the walk of shame but Kyle bossed it.

The gig goes at a cracking pace, ‘Gonna Need Some Love Tonight’, the aforementioned ‘Ignite’, ‘One of a Kind’, ‘Wherever We Are’ take us to the final song of final song of the night ‘Savin’ Grace’ and they walk off to a cheers from a very happy audience.

Except they don’t walk off. The band don’t leave the stage having debated backstage before the gig not to do that poncy stuff, which brings us a full circle to where I started with Vega: Kiss of Life closes the set and has the crowd singing along with Nick and the boys one last time.  Turning down Nick’s offer to the fans to ‘see you at the bar’ I head off home a happy chap. Being picky I’d have liked to have heard ‘Neon Heart’ in the set, but if you did a fans request gig then the boys would still be on stage a couple of days later.

Vega aren’t a one man band. This is a band that is clearly enjoying themselves and have the songs and stage craft to win over a bigger audience. Thirty years ago when AOR was charting, they would have followed the Magnum trail to the Hammersmith Odeon.

Vega, big in the Midlands and bringing a catchy chorus to your area; don’t miss them.