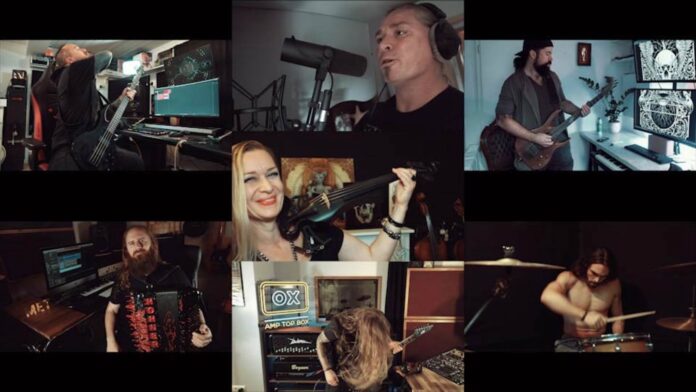 Equilibrium have come a long way since the release of their debut album Turis Fratyr in 2005, which became a milestone in the pagan metal world of the new century.

Whilst waiting for their long sold out sophomore album Sagas to finally be re-released on vinyl on November 12th (order at https://bfan.link/Equilibrium-Sagas), the band now takes us even further back into their past, having invited musicians, friends, tv stars and youtubers to join them in this new interpretation of their legendary hit ‘Met’ – a track which never fails to make fans raise their glasses to the stage and sing along. With keyboards, violin, accordion, traverse flute and many spectacular guest solos, this is a perfect celebration for the band’s 20th anniversary. So watch Equilibrium and guests, such as members from Saltatio Mortis, Solstafir, Lord Of The Lost and Primordial, come together for this uplifting as well as hilarious version of an evergreen.

Guitarist and founding member René Berthiaume comments:
“I still remember how I sat in my bedroom in front of the computer, with a couple of mead bottles next to me. We wrote this simple first song for our first show but we would have never expected that this would have made such an impact on the underground scene. It was very fun to dig out this track and create a special version with many friends we have met (pun intended) during our journey.”

Equilibrium are still busy in the studio with the recording of their upcoming 7th album that is currently scheduled for 2022.

In case you missed their latest single ‘Revolution‘, enjoy it here: https://youtu.be/BXXUTKQjIjU
Stream or download the single here: https://bfan.link/Equilibrium-Revolution