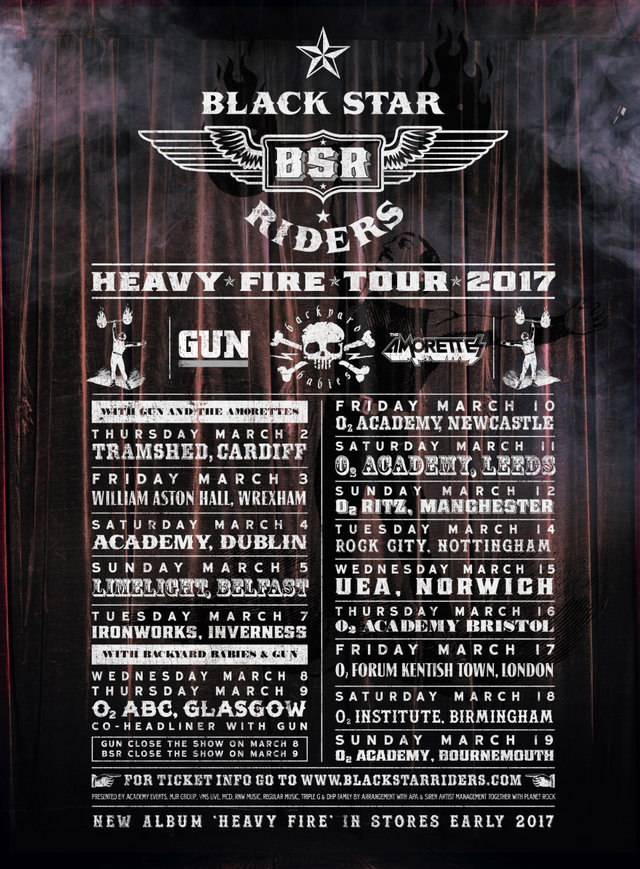 BLACK STAR RIDERS are hitting the road next year with a comprehensive UK tour in support of their new album »Heavy Fire«, set for release in early 2017.

After a full year off the road, BLACK STAR RIDERS (Ricky Warwick, Scott Gorham, Damon Johnson, Robert Crane & Jimmy DeGrasso) are back with a 16 date UK & Ireland run, joined on the first five dates by Scottish rockers GUN and THE AMORETTES and then Sweden’s own BACKYARD BABIES with GUN on the remaining 11 shows.

Ricky Warwick says: “It seems like ages since we did the LEPPARD / WHITESNAKE tour so we are all really looking forward to be back out on the road with BSR. Our third album will be out just prior to the dates so it’s going to be great to play tracks from that along with favorites from the first two records also. Having my old friends from BACKYARD BABIES, GUN and THE AMORETTES out with us too is just icing on the cake to make a great tour!”

The band are currently in the studio in Nashville, once again with producer Nick Raskulinecz putting the finishing touches to »Heavy Fire«.
Scott Gorham: “It’s great to be back with Nick, after such a great job on »The Killer Instinct« it was a no brainer to continue the relationship and this album is going to blow everyone away!”