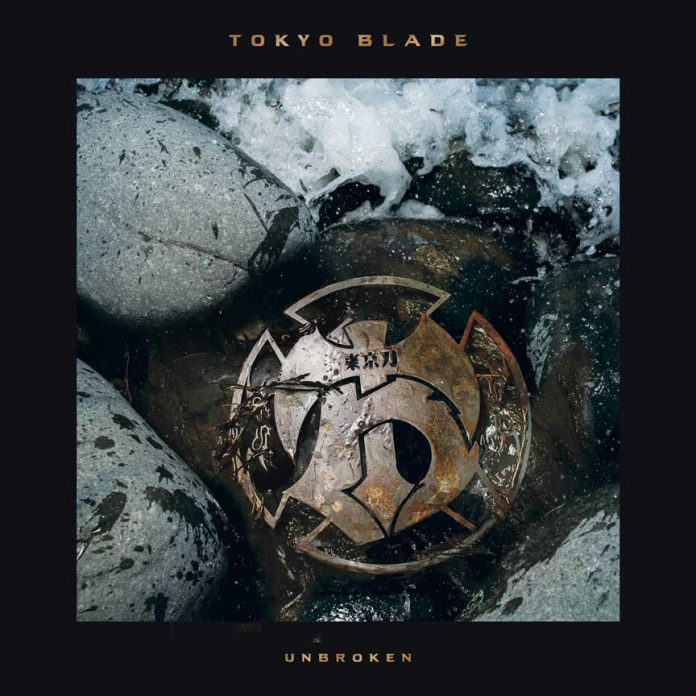 3MS Music are delighted to announce that Tokyo Blade will release a vinyl version of  this year’s album “Unbroken”, the band’s eighth, on 5 July 2019 [3MS018LP] – this is a limited first run of 500 copies. The band’s roots go right back to the heady days of the rise of the NWOBHM and on this eleven-track album they prove that, as Powerplay said, “This particular blade is still razor sharp.” “Unbroken” is uncompromising stuff.  Classic Rock Society hailed, “One of the best hard rock albums to be released in the last couple of years.”

Whilst the band shared stages with the likes of Metallica, Ozzy, Dio and Scorpions at Festivals across the world, the line-up changed regularly, but in recent years founder member and lead guitarist Andy Boulton has steadied the ship.  He re-enlisted four parts of the classic Tokyo Blade line-up, guitarist John Wiggins, bassist Andy Wrighton and drummer Steve Pierce, with vocalist Alan Marsh returning for a 3rd stint.

‘Unbroken’ is the first Tokyo Blade album since 2011’s acclaimed ‘Thousand Men Strong’. As ‘Devil’s Gonna Bring You Down’ bursts out of the speakers you know that this is no nostalgia kick, Tokyo Blade mean business.  ‘Unbroken’ is heavy, a real Metal tour de force from a band that helped shape the genre.  Andy Boulton said, “Blade are back with the 100% original line-up. Undeniably our journey has been a tough one and it’s taken enormous effort to keep Tokyo Blade alive. With the original line-up coming together it’s a very significant release. This is our 8th studio album and our 3rd with the original line up; we truly believe that this album should have been the rightful successor to ‘Night of the Blade’ but fate had other plans. In our opinion this is our finest album; ultimately the fans will be the judges and our thanks go out to them, 3MS and everybody else who made this album possible”.

TRACKLISTING
Side A – Devil’s Gonna Bring You Down / Bullet Made of Stone / Burn Down The Night / No Time To Bleed.
Side B – Dead Again / Bad Blood / Black Water / Last Samurai

Tokyo Blade‘s name and enviable reputation may have been forged in the late 70s as part of the NWOBHM that stamped its mark on the whole world, influencing countless bands, but ‘Unbroken’ is a serious return to form, “Catchier than Ebola,” according to UberRock!  As Record Collector said, “The sound of a band who’ve evidently kept their skills sharp since their heyday…. Tokyo Blade are well placed for a victory lap“.