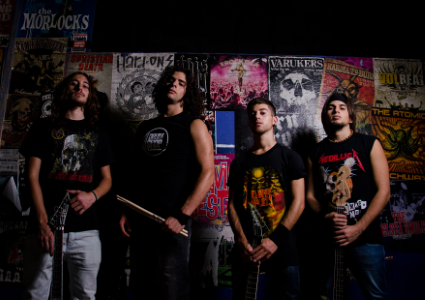 Young thrashers promise to “step it up”

Ultra-Violence are a young Thrash Metal band from Turin, Italy formed in the fall of 2009 brainchild of Loris Castiglia (vocals/guitars) and Andrea Vacchiotti (guitars). The line-up was completed in a short time by Roberto ”Robba” Dimasi (bass) and Simone Verre (drums). The guys were all born in 1994 and they met at school.

The band released “Wildcrash” EP in 2012 via Punishment 18 Records gaining some good recognition in the underground scene and increasing expectations for their debut album “Privilege To Overcome”, released in 2013 via Punishment 18 Records. The album received positive approvals from all over the world and was included in a large amount of magazines and websites like one of the best Thrash Metal album of 2013.

After some live shows in the northern Italy, with some metal legends like Jester Beast, M:Pire Of Evil, Necrodeath, Sacred Steel and Vicious Rumors, the band went abroad to play the headliner “Ride Across The Spain” mini-tour 2013 and the “European Hazard” tour 2014 with the young thrashers Game Over and Condition Critical.

With the bands 2nd album “Deflect The flow” now complete, 2015 will see the band move to the next level….They say: “you have been warned!”