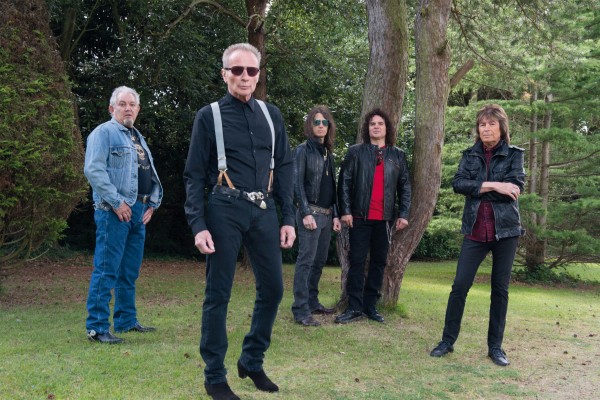 ‘A Conspiracy Of Stars’, the follow up to 2012’s hugely acclaimed ‘Seven Deadly’ album, (which charted at number 1 in the UK rock chart, 63 in the national album chart and 9 in the UK Indie chart), is an even more accomplished body of work than its mighty predecessor. ‘A Conspiracy Of Stars’, a powerful collection of eleven compelling compositions, sees UFO prove that past and present can be blended in one glorious, homogeneous whole. Arguably one of the best albums the band have ever made, ‘A Conspiracy Of Stars’ continues to expand on the more blues infused direction taken on ‘Seven Deadly’, yet also edges ever closer to the ‘classic UFO’ sound of late 1970’s albums such as ‘No Heavy Petting’ and ‘Lights Out’.

The album was recorded by the current line-up (for the first time) of original members Phil Mogg (vocals), Paul Raymond (keyboards, guitar) and Andy Parker (drums), plus lead guitarist Vinnie Moore, (who has been a permanent member of the group since 2003), and American bassist Rob De Luca, who joined the fold in 2012.

The majority of the new material was composed by virtuoso guitarist Vinnie Moore, whose expert, fluid licks and superb solos put their mighty stamp on every hook-laden, seductive, melodic hard rocking gem on ‘A Conspiracy Of Stars’. The album also features two songs written by bassist Rob De Luca, one written by Paul Raymond, and a collaboration between Raymond and De Luca.

All the lyrics were penned by front man Phil Mogg, a man of the people who once again proves his talent as a keen observer of the human species. On brooding opener ‘The Killing Kind’, a punchy, no compromise statement of intent, he opines “Tell a story about love and what lovers find, a story of possession, the killing kind.” On the smoldering song ‘Precious Cargo’, an equally subtle declaration of love, he sings “The scatter rollers coming down, summers been and turned around, it don’t seem so long ago, that you were my precious cargo”.

The lyrics and music for ‘A Conspiracy Of Stars’ were written and composed in summer 2014 at the Barn Room rehearsal studios in Kent, before UFO decamped a few miles further east to Chris Tsangarides’ Ecology Rooms studio, to record and mix the album. Coincidentally, Tsangarides was working at the studio as a 14-year-old trainee when UFO recorded their debut album ‘UFO 1’ in England in 1970.

UFO, an unstoppable act who are clearly firing fully on all cylinders, are scheduled to tour Germany, Poland, The Czech Republic, Lithuania and Switzerland in February and March, prior to an extensive 17 date UK and Irish tour in April and May 2015. Dates are:-