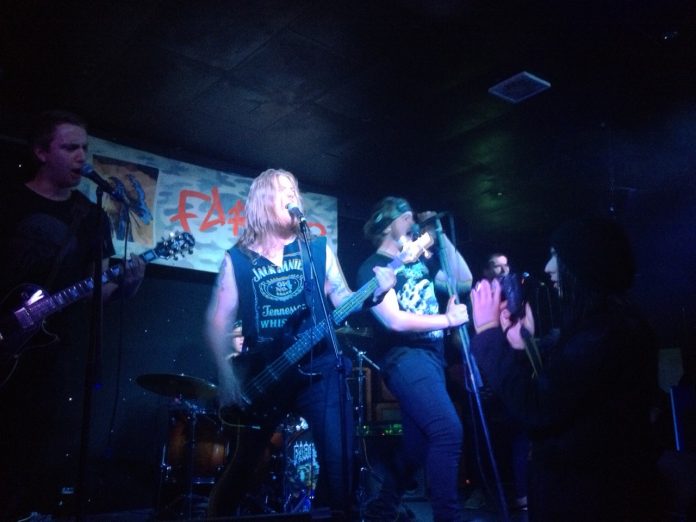 Local boys Lawless Lands know how to get on the right side of MVM. Thin Lizzy shirts – as sported by one of their guitarists, Sean Barrett – always do it. Then there is their music, which is rather excellent too. “Face Of Stone” has a mighty hook, “Ascent Of Man” by contrast possesses an almost funky bass rumble. The band are capable of writing ballads too, as “Along The Way” proves. “The Huntress,” a new song they play, makes something else pretty clear: Lawless Lands are a band with plenty of ideas and the talent to match.

Eyes Of The Raven are made for these types of shows. A band who can more than hold their own in any company and who have some brilliant songs. “Redeemer” is chief amongst them, and has been so for years. Put simply there is absolutely nothing to dislike here, as EOTR, rattle through their usual half an hour mix of angry music – the superb “Lessons In Blasphemy” is a case in point – and smiling banter. “Five Year Winter” is perhaps their heaviest moment, but like sentiment in the Pantera-like “What Binds Us” says, you can put whatever label you like on this, it’s just classic metal when all is said and done. Their new album is launching soon. It’s going to be a belter.

West Yorkshire’s Ironrat play a thumping track called “Eye Lucifer” second song in. If you think you’d know what it sounded like based on the title, you’d be wrong. It’s intro is like Therapy? on steroids, but then it kicks in and is all visceral metal.”Last Outlaw,” rides in on the back of a Down type of riff, and singer Chris Flear has a Skynryd tattoo on his leg. Don’t even try to rationalise it, rather, the point is that Ironrat are all these things and more. They are gritty, dirty, and there’s a whiff of late-90s flick knife wielders, Groop Dogdrill, about them. There’s a new one “Black River” that has an insistent Orange Goblin kind of groove, and so it goes. “We are Northern, we’ve got a black cloud hanging over us” says Chris at one point. The best music always did need misery to thrive, and as they leave us with the boot to the jaw that is “Weed Machine” it’s clear that Ironrat are thriving very nicely, thank you.

Going outside to shout at people to come in and watch them might not be conventional, but then, little about Morass Of Molasses is. The three piece from Reading have been favourites of MVM for a while for the simple reason their bluesy, almost prog take on stoner metal was something very different. On songs like “So They Walk,” which serves as tonight’s opener, and “Ashtabula,” which follows, they show their winning hand early. Best of all, though is “Centralia” which adds a huge blues groove to proceedings, before its enormous Sabbath-type swirl threatens the foundations. Despite – by their standards – rushing through things a little to fit their set into their allotted slot, by the end of “Rotten Teeth” and the undulating “Wrath” which throws everything good about the band up in the air to see what sticks, there’s something very obvious. So at the risk of being boring and repetitive, Morass Of Molasses are one of the most promising and original bands around – and that’s worth shouting about.

The rise of Signs Of Fire over the last 12 months or so has been a really gratifying thing to witness. Once merely a band with potential, they have the confidence now to pull off a headline slot in their hometown with ease. Their first song might talk about misery, the second might reckon – as its title says – that they’ve been to the “Bottom Of The Well” but the men playing it can’t stop smiling . Signs Of Fire aren’t sporting Lizzy t-shirts, but amongst their number are Sabbath, Black Label Society and Skid Row clothing, this is pertinent, because whilst you should never judge a book and all that, with SoF it makes more sense than normal. With the massive groove of the first two and the eye for a chorus and hook of the third, the four piece have all the bases covered. When it all comes together, as on “Divided We Fall” these guys are very, very good indeed, and their medley of Joe Bonamassa’s “Ballad Of John Henry,” Sabbath’s “Children Of The Grave” and Metallica’s “For Whom The Bell Tolls,” is inspired. Even better live at this stage then on their EP (although that was excellent) – here “The Preacher Reigns” comes alive. If they can harness their prodigious onstage energy Signs Of Fire have quite the future in prospect. Like singer Tommy exclaimed: “Man, this has been fuckin’ cool!” As the enormous “Cain And Abel” ends their set, it makes no real difference whether he meant his bands own set, or the night in general, he was bang on the money.