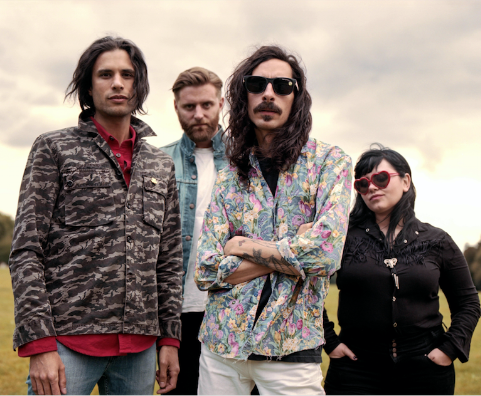 Bristolian alt-rockers Turbowolf have today released, ‘The Free Life’, the title track from their upcoming third album which will be released via So Recordings in March 2018.

‘The Free Life’ is a dark, stomping sonic cyclone laden with searing, overdriven guitar and seething bass lines. With a venomous opening that artfully builds to the edge of delirious euphoria before exploding into a hammering groove, the track’s joyous chorus is a swirling exploration of freedom, soaring into a howling cry that questions the nature of reality itself.

It premiered last night on The Radio 1 Rock Show, and is a kaleidoscopic, six-minute introduction to the wonders that abound on the forthcoming album, promising marvellous eccentricities laced with mysticism, magic and dark cosmologies.

Lead singer Chris Georgiadis comments on the band’s return, “Welcome back. How are you? We’re great, thanks for asking. Our new album ‘The Free Life’ is what we’ve been doing recently. We’ve taken the liberty of packing it full of great songs for your listening pleasure but would still appreciate your feedback. Contact us by whispering your thoughts and feelings into the breeze. Be kind to yourself and enjoy it.”

Bursting with pounding rhythms and undulating tempos, The Free Life is a psychedelic, riff-steeped auditory odyssey.

Turbowolf will be unveiling songs from the new album next week as they blast through a seven-date headline tour culminating in a just-announced FREE Halloween show at London’s Old Blue Last. One of the most exciting, exhilarating and insane live bands on the planet, these tiny shows are set to blow minds across the country!!