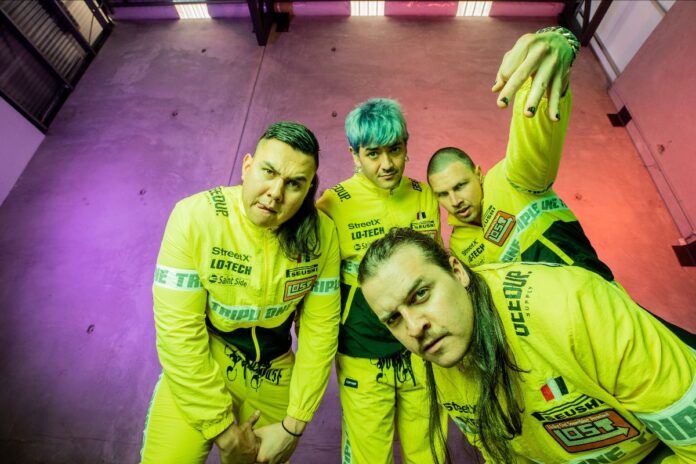 Australian four-piece Triple One have revealed their stadium-sized anthem ‘COME OVER’, their second single of their year following the award-nominated ‘BLOOD RAVE’.

Co-written with Matt Mason of rock trio DMAs, you can stream ‘COME OVER’ and watch the video here: https://ffm.to/comeover111

While Triple One have earned notoriety for their slapstick humour and boorish punchlines, ‘COME OVER’ sees them delve into the introspective artistry that has evolved triumphantly since their first single. The song combines Triple One‘s raw storytelling with more abstract references, describing “a situation where you’re stuck in a loop of bad habits in a relationship, and not really being aware of that until it’s too late. Ultimately, you have to know when to move on; but we often choose what we want, rather than what’s actually good for us.” What results is an intimate listen that highlights the group’s intensely relatable songwriting, reaching a die-hard fanbase that stretches across Australia and well into Europe.

Sonically, ‘COME OVER’ is a tender statement that still captivates listeners with grandiose flair. Having shared a studio next door to longtime friend Matt Mason of DMAs, he offers the gleaming, nostalgic guitar riffs that open ‘COME OVER’, building gradually into one of Lil Dijon‘s most anthemic, stadium-sized hooks: “I wish I knew your hands like I knew I used to/Between my fingers, run through your hair/And it’s the same mistakes we making in motion/Pretend you know this, I can’t pretend.” Producer Billy Gunns continues to effortlessly fuse the hip-hop and alternative worlds that Triple One have long dominated, placing Mason‘s riffs alongside trap-flavoured 808s and furious drums that foreshadow the song’s most momentous drops. Rappers Marty Bugatti and Obi Ill Terrors trade poignant verses describing their own fleeting joys and inner turmoil, giving ‘Come Over’ a distinctly greyscale finish.

‘COME OVER’ arrives alongside an avant-garde visual accompaniment directed by Marty Bugatti, and is a sardonic take on consumption, hedonism, and fast lifestyles, showcasing the group’s trademark humour and style. Marty Bugatti explains further, “I thought it would be interesting to take the very emotive/introspective song and juxtapose it against a typical pop/rap music video. The song touches on lost love and the monotonous cycle of living in excess and bad habits, whereas the video glorifies material possession. I wanted it to feel like some hotshot director that knew nothing about Triple One came in and said “This is how we make a pop/rap music video” without paying much attention to the actual song itself or the message behind it.”

The group have also announced their Come Over Tour, a 10-date run that brings the transcendent Triple One live show to Australia’s sweatiest underground venues, showcasing a mix of new material and old favourites. These will be the group’s most special and intimate shows yet, before their next project catapults them into the stratosphere.

‘COME OVER’ follows Triple One‘s recent single ‘BLOOD RAVE’, which recently garnered an inaugural J Award nomination for ‘Australian Music Video of the Year’. The single was added to national radio rotation, as well as earning the group a cover spot on Spotify’s The Hybrid playlist. In 2020, Triple One released their debut album Panic Force which debuted at #1 on the ARIA Hip-Hop charts, followed by a sold-out national tour. Their 2019 breakout single ‘Butter’ has been certified Gold in Australia, while the group have become one of the country’s most ferocious live acts, playing at the landmark events including Falls Festival, Listen Out, and this year’s virtual Splendour XR.
Stay connected with Triple One:
Website | Facebook | Twitter | Instagram | Youtube