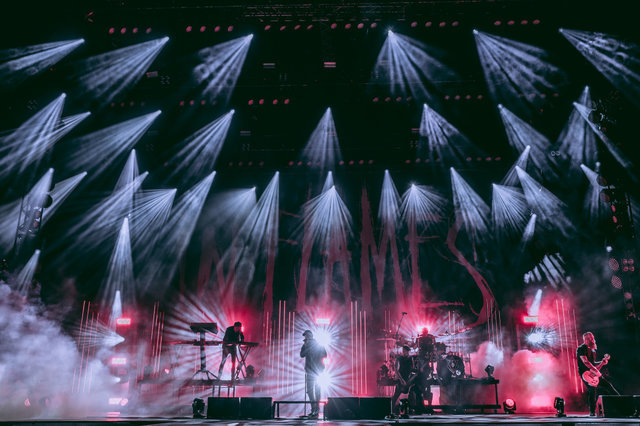 It’s getting warmer and we’re closing in on this summer’s festival season. The first installment of IN FLAMES new festival, BORGHOLM BRINNER (Borgholm is Burning), will take place at the infamous Borgholm Castle this summer from July 27th–28th on the island of Öland, Sweden. With just two more acts to announce, the line-up is almost complete.

The latest addition to this impressive line-up are Swedish ghosts from the North, TRIBULATION. Straight from Arvika, they are a metal band known far outside of the Värmland woods. Their fourth album, ‘Down Below’, was released in January and received praise from critics and fans alike. We can’t wait to see what TRIBULATION will bring to BORGHOLM BRINNER this summer!

In addition, IN FLAMES are happy to announce that a limited number of 1 day tickets (Friday and Saturday individually) will be released today via this link: http://borgholmbrinner.se

The current line-up for IN FLAMES’ own festival, BORGHOLM BRINNER is:

IN FLAMES singer Anders Fridén states:
“I think every band dreams of being able to do this one day – at least for us it’s always been in the back of our minds and right now feels like the best time to do it. Whether it’s putting on your own festival, it’s an indescribable feeling to have created a community from your music, and even crazier to have the ability bring that community together in a physical place – playing and enjoying music together, drinking together etc. And in a castle of all places. That’s another thing. It wouldn’t be an IN FLAMES festival if it were just happening on a plot of dirt. It’s got to be special so our fans can have the ultimate experience, so we can pay them back for being so great to us for 20 years with an awesome weekend they’ll never forget. We’ve also hand-picked the best bands for everyone to enjoy and although we can’t say everyone who’s playing yet, we can promise there will be no disappointments.”

See you this summer for Borgholm Brinner!

In Flames recently released a digital EP ‘Down, Wicked & No Good’ featuring cover versions of Depeche Mode’s ‘It’s No Good’, Alice In Chains’ ‘Down In A Hole’, Chris Isaak’s ‘Wicked Game’, and a live version of Nine Inch Nails’ ‘Hurt’.

Due to high demand from Jesterheads, the songs have also been released as a 10” mini LP – available as both Light Blue and Light Blue/Black Splatter Vinyl 10″.