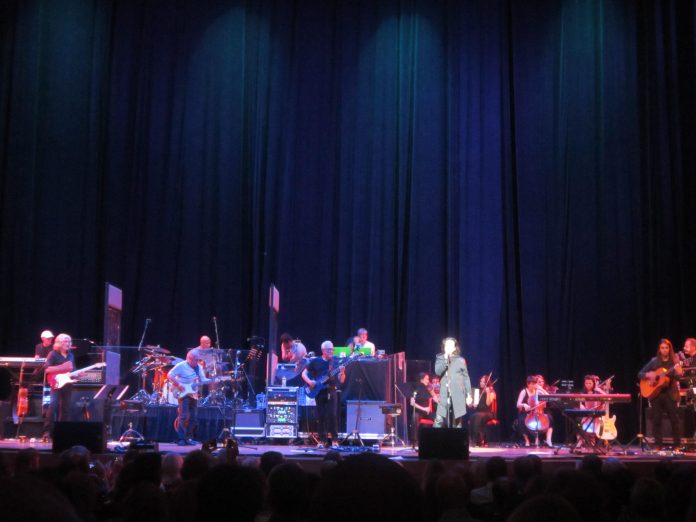 Whatever you think of Trevor Horn, you have to admit that this bassist, singer, songwriter, music producer and recording studio and label owner has lived a rich and varied life and has been part of some great records. Indeed, he has been tagged as the man who reinvented the Eighties. He`s out of a short excursion around the UK to promote his most recent hit album Trevor Horn Re imagines The 80’s.

The show not only includes his band but has a string section called the Sarm Orchestra and guest vocalists in X Factor winner Matt Cardle and Marillion`s front man Steve Hogarth.

Birmingham was the third in the four-date tour and part of the reason for my wanting to attend was to hear Steve Hogarth`s interpretation of the songs that he has recorded on the album. I rate Mr Hogarth as a vocalist and have seen his band Marillion numerous times. There were a fair few in the audience wearing his bands t shirts, so it seems that I wasn`t the only curious participant.

The show kicks off with The Frankie Goes To Hollywood classic `Two Tribes` with Mr Cardle on vocals before Mr Horn takes to the mike and shares Buggles`s `Video Killed The Radio Star` As 10cc`s Lol Creme  is part of the band they undertake a couple of his hits with `Cry` and `Rubber Bullets` The very visual Roberto Angrisani sings the former and Creme the latter. The time arrives and Mr Hogarth takes to the stage for Joe Jackson`s `It`s Different For Girls` and David Bowie`s `Ashes To Ashes` What I enjoyed was that these were interpretations of the songs rather than a straight covers and the string section really added depth to these tunes. The songs were given an introduction by Mr Horn which gave an interesting insight, not only to why they were chosen but how they came to fruition. The first half of the show closed out with artists such as TaTu, Grace Jones, Frankie Goes To Hollywood, 10cc and Tears For Fears being covered. Singers Izzy Chase and Kate Holmes vocals were outstanding on the TaTu cover and I have to say, i`m no fan of X Factor but Matt Cardle certainly added another dimension to 10cc`s ` I`m Not In Love.

After a short intermission, the troupe return and open with Yes`s `Owner Of A Lonely Heart`.

A downbeat version of Springsteen`s `Dancing In The Dark` is belted out by Roberto Angrisani before Duran Duran`s ` Girls On Film` gets an airing with Izzy and Kate taking on the task.

Steve Hogarth returns in an elaborate brilliant white frock coat and shares an interesting version of Seal`s `Kiss From A Rose` before donning a leather jacket and belting out New Order`s anthemic `Blue Monday`.

Frankie`s `Relax` with Mr Cardle fronting is blasted out before what is essentially the encore with `God Gave Rock `n` Roll To You` and Dire Strait`s `Money For Nothing` getting the audience on its feet singing and dancing along. The whole company, orchestra, band and guest singers take their bows and that`s the two hour show over.

I thoroughly enjoyed tonight`s performance. I did have some reservations beforehand, but Trevor Horn has surrounded himself with some gifted musicians and interesting guest vocalists with a small orchestra who brought a different dimension to some familiar songs. His participation in the shaping of these numbers was also fascinating and even a hardened cynic would find it difficult not to enjoy this evening`s presentation. It was certainly a night to remember.