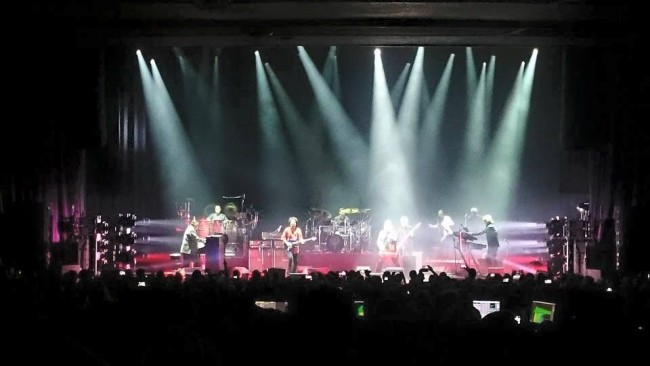 On the third night of four on a whistle stop tour of the UK and Ireland you could feel the anticipation amongst the virtually sold out crowd at the wonderful Manchester Apollo, this was the first run of shows in the UK for Toto since the epic Hammersmith Apollo gig back in June 2011….which I still rate in my top five gigs of all time.
The band burst onto stage bang on 8.30pm to deliver the brilliant ‘Running Out Of Time’ from the brand new album ‘XIV’ which has become a firm favourite with fans since its release in late March of this year, has Joseph Williams ever sounded so good? I seriously doubt it….’I’ll Supply The Love’ and another new track ‘Burn’ followed to wild applause from the audience….this was already building up to be a very special evening.
Lesser played track ‘Stranger In Town’ from my personal favourite album ‘Isolation’ was a real treat as was the sublime ‘I Won’t Hold You Back’, the classic ‘Hold The Line’ and the simply wonderful ‘Takin’ It Back’ sung by Steve Porcaro…..add all these great tracks and newbies such as ‘Holy War’, ‘Orphan’ & ‘Great Expectations’ and you have a front runner for gig of the year.
Classics such as ‘Pamela’, ‘The Road Goes On’ and set closer ‘Rosanna’ kept the packed crowd singing along….we just didn’t want this amazing night to end….the band came back on to treat us to ‘On The Run’ and ‘White Sister’ before filing off the stage…..we all knew what was coming next though….
Steve Lukather and David Paich asked the crowd if they wanted one more? To be honest we would have wanted a lot more but that’s just being greedy…..so after 135 mins we were left with without doubt one of the greatest songs of the last 35 years…..who cares that the geography in the song is a bit off…..we all love that song…..and we would have happily “blessed those rains” down in ‘Africa’ for a lot longer….but all wonderful things must come to an end.
On the basis of the crowd reaction to these shows and how well the new album has been received…..let’s hope that we don’t have to wait another four years to see this band once more, Toto are a joy to behold and a band at the very top of their game.