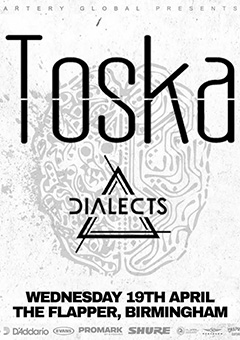 Damian speaks the language of the instrumentals

On the Dialects face book profile; these Glaswegians are labelled as Math rock / Experimental / Post-rock. I’m not too sure what Math rock is but whatever it is, I really like it and this band.

The group comprises of Conor Anderson on guitar, Steven Gillies on guitar, Ali Walker on bass and Szymon Ostasz on drums.

I was lucky enough to see these guys supporting Icelandic metallers Solstafir nearly two years ago at the Institute and tonight they are just as good, if not better. The boys are out supporting a recent release, a new double A side single featuring two brand new tracks, ‘Illusory’ and ‘When You Die, You’re Truly Alone.’

The venue is pretty full and the short set is really well received, with the band even commenting that lasttime they felt like tumbleweed was floating past, when they tried to connect with the audience.

Although the band are predominantly an instrumental outfit, one song shared “Good Luck Felix” had a slight chant of “too the beat ha” towards the end of the tune.  The music is a wonderful mix of intricate guitar work poured or layered over a great powerhouse of bass and drums. At times I felt myself drifting off into a trance and none more so than the final track, the superb “Mountainous.” A cracker of a set and let’s hope it’s not another two years before they come back.

A quick switch around and Toska hit the stage. A three piece outfit from Brighton with Rabea Massaad on guitar, Dave Hollingworth on bass and Ben Minal on drums.

It’s straight into the music and this time it’s more sort of Progressive instrumental. These guys are not afraid to play by the skin of their teeth as they introduce a new number second song in. we then get a track called “When Genghis Lives” before a song called “Abba Mansion” which was finished the day before yesterday. Edgy stuff.

The music is free flowing one minute then almost aggressive before heading into sort of controlled disorder. We were offered a marvellous hours worth of stunning musicianship and some well crafted tunes. This was not your usual rock night out but I must admit we didn’t miss out by not having a singer in either band.

It was a night to really stand back and let this great music wash over and get inside your psyche.

A very different but really uplifting and rewarding evening.