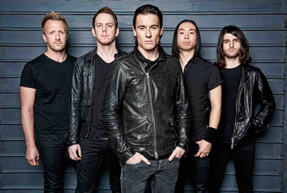 Toseland is pleased to announce the release of double A side “Fingers Burned/Bullet” on March 31st2017. The release will feature “Fingers Burned”, taken from the current album “Cradle The Rage”, and brand new song “Bullet”, another Toseland/Jepson composition that shows another side to the expanding Toseland catalogue. “Bullet” was recorded during the Cradle The Rage sessions and mixed by Mike Fraser (AC/DC, Aerosmith).

The double A side will be released on streaming and download platforms on the 31st March 2017. It will also be released as a limited edition double A side 7″ single, which will be available exclusively at the brand new Toseland shop www.toselandmusic.com. Pre orders for the Vinyl are available now.

Also available at the shop will be a new line of fashion clothing and accessories, based on the Toseland T-logo that features on the 7″ sleeve. This will include men’s and women’s high end t-shirts, sweatshirts, enamel badges and key rings.

To support the release of “Fingers Burned”, Toseland will embark on a full UK tour in April 2017. The UK shows will be followed by an extensive European tour in later in April and through May 2017. Toseland will preview the UK tour with a headline slot at Planet Rock Radio’s Winter’s End Festival in Poole on February 24th 2017 – https://www.gigantic.com/winters-end-sandford-holiday-park-2017-02-24-00-00

Toseland headline dates are as follows:

Tickets will go on sale on Monday 19th December. Available from all usual outlets
Support in Leeds, Cardiff and Milton Keynes will come from The Brew. Support on other shows TBC.