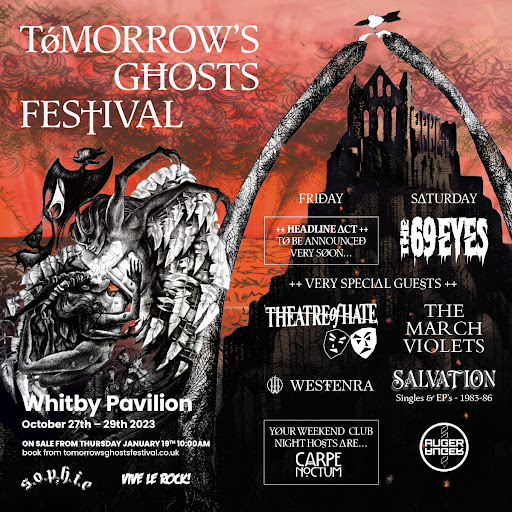 Resurrecting for another Halloween extravaganza – TOMORROW’S GHOSTS FESTIVAL – will return this Autumn and with a devilishly good-looking line up to boot.

Following the runaway success of the SOLD OUT Halloween 2022 edition, the UK’s ultimate gothic destination festival will be taking over the birthplace of Dracula once more for a weekend celebrating the very finest the dark arts have to offer.

Hosted at the Whitby Pavilion between the 27th to 29th October, today the festival is unveiling those first names who will be appearing at the Tomorrow’s Ghosts Halloween Gathering…

A headline set to die for, ‘Goth ‘n’ Roll’ supremos THE 69 EYES will be topping the bill on Saturday night. Conceived in darkest Finland in 1989, the band have been peerlessly shaping the genre for over three decades and counting. With several platinum selling albums under their belts including ‘Blessed Be’ and ‘Paris Kills’, the quintet have become paragons of the goth subculture, securing #1 records in their home country and widespread acclaim across the globe. With the cogs currently in motion for their first activity since 2019’s star-studded 12th album ‘West End’, prepare to be plunged into their sinful cosmos of love, death and eternal melancholy all over again as they rock-up to Whitby for this momentous headline show.

On Friday and Saturday, the headliners will be flanked by supporting slots from some Very Special Guests each night. Stepping out of the shadows and into the limelight, 80s’ scene originals THEATRE OF HATE will be returning to Yorkshire to perform some of their pitch-black post/punk creations. Featuring founding members Kirk Brandon and Stan Stammers, plus esteemed musicians Adrian Portas, Chris Bell & Clive Osborne the band will continue their successful reunion of recent years with an appearance at Tomorrow’s Ghosts. Expect indie chart hit singles like “Do You Believe In The West-world?”and deep cuts from their untouchable early 80s period, plus modern classics from their acclaimed comeback albums ‘Kinshi’ and ‘A Thing Of Beauty’.

Following in their footsteps, Saturday’s very special guests will be Yorkshire-born alt/rock mavericks THE MARCH VIOLETS. Extending their first live tour since 2015 with a show at Tomorrow’s Ghosts, the boundary-shredding Leeds band will be serving up one of the weekend’s most sought-after sets. With dark majesties like “Walk into the Sun” or “Crow Baby” in their canon, TMV will be bringing them to life with a live collective featuring founding members Rosie Garland (performer, poet and author) and Tom Ashton (Guitarist, producer and studio owner), plus William Faith (musician and vocalist with Faith & the Muse, Conflict, The Bellwether Syndicate). Intending their 2023 shows to be a celebration of The March Violets’ legacy, while also honouring the irreplaceable contribution of friend and founding member Simon Denbigh, expect a set strewn with classics and surprises, and so much more.

Tomorrow’s Ghosts Festival Halloween Gathering 2023 are on general sale on Friday January 20th @ 10AM, with select tickets available for pre-sale on Thursday 19th January @ 10AM.

Tickets are priced as follows:

ADDITIONAL INFORMATION:
Ages 8+
Under 14s to be accompanied by an adult over the age of 18 at all times.
Over 18s only for after show club night events.
Doors 6.00pm / Curfew 02.00am