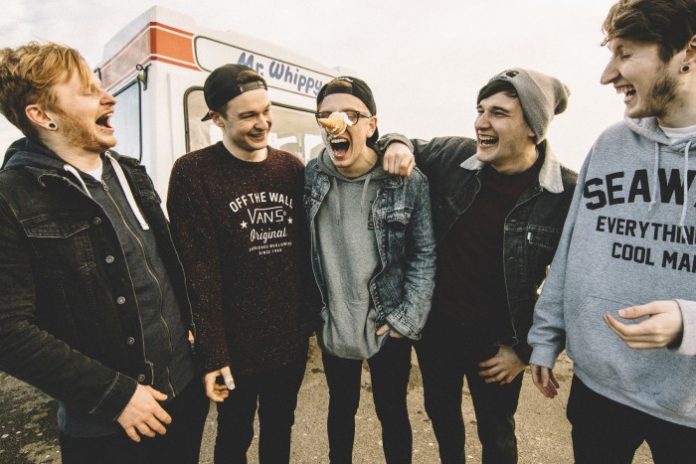 Manc pop punks release new video
“Growing Backwards is about the people who tell you it’s not feasible, it’s not realistic and you might as well not bother”, says Alex Hardiment, frontman of Manchester pop punks Not Today, of their new video single ‘Growing Backwards’; “It’s about breaking away from that negativity and doing exactly what you want to do with your life”. Sticking to their guns, the band hope they have conveyed this sentiment, take a look at the video here.

With a band name inspired by a line in Toy Story, it’s evident that the quintet (completed by guitarists Mitch Cundale and Sam Lawson, bassist Kristian Fisk and drummer Simon Penhallow) are all about looking on the brighter side of life. Hardiment explains: “The main theme of the EP is about being in a good place – moving forward from a dark period and “making headway. We all know there are dull things in life, but we believe that fun that can still be had, even if you have to go to work on Monday morning.”

Sophomore E.P, Headway, is a musical testament to that fact, its 5 tracks bubbling with bright, upbeat effervescence.  “When it comes down to it, pop punk is an absolute blast to play,” says Alex, his PMA unshaken by the crowded state of the UK pop punk community; “The scene might be a little saturated, but we try to make sure that our music isn’t paint by numbers pop punk and has its own character that sets it apart from other bands. We absolutely love what some of our peers are putting out, but we like to think we’re doing something that caters for a big audience, regardless of whether you like pop punk or not.” With each of its songs built around soaring choruses, each one larger than the next, Headway should see Not Today standing out from the herd. “This release is incredibly important to us, because it’s the first time we’re trying to really push our name out there,” states Alex, “We made a pledge to take this band as far as we possibly could, as long as it’s fun! We’ve plenty more music left in us, and while we have that passion to write and to play, we’re not going anywhere.”