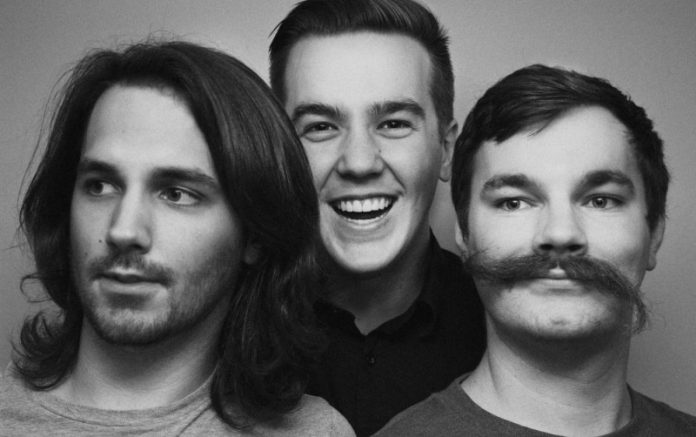 Minnesota’s Tiny Moving Parts are having the Best. Day. Ever. in their new video for the track ‘Headache’. The trio will release a brand new LP on Big Scary Monsters, titled ‘Celebrate’, on May 20, 2016. ‘Celebrate’ is available for pre-order through Big Scary Monsters in Europe and the UK.

Tiny Moving Parts will embark on a full US headlining tour this summer with support from Prawn and Free Throw. Tickets for select headlining dates are on-sale now and the entire tour will be on-sale this Friday at 12pm local time.

Tiny Moving Parts drew attention with the release of their debut LP ‘This Couch Is Long & Full of Friendship’ in 2013 on Kind of Like Records, eventually signing to Triple Crown Records in 2014, who released their second LP ‘Pleasant Living’ later that year. For ‘Celebrate’, the band headed back into the studio with Greg Lindholm who recorded ‘This Couch Is Long & Full of Friendship’, and the result is a record that is complex, dynamic and shows a band all grown up. “Celebrate is really about optimism. Things get stressful throughout life, and you just need to stay positive or you’ll destroy yourself,” explains guitarist/vocalist Dylan Mattheisen. The album was mixed by Vince Ratti (Circa Survive, The Wonder Years, Title Fight) and mastered by Sarah Register (Andrew WK, Brand New, Sia).

Mattheisen has played in Tiny Moving Parts with his cousins, brothers Matthew Chevalier and Billy Chevalier since junior high school, and their tight, mathy post hardcore-pop punk combination shows their skills in spades. Their live show is frenetic, and their musical prowess is impressive – the complexity of their songs makes it difficult to believe there are only three of them onstage.