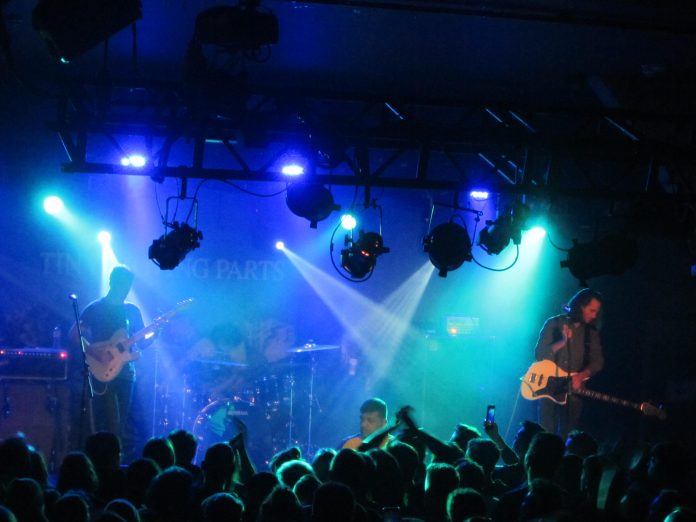 I was keen to see how these songs amongst others would transfer to a live situation.

A good sign of the bands standing is that I’m sure this gig was initially pencilled into the 300-capacity room and was upgraded to the 600-capacity room, which is almost full.

It`s no secret that singer Dylan Mattheisen is fearful of his mortality, a factor that has formed part of every album the band has released so far. Indeed, songs like `Headache`, `Common Cold` and `Bloody Nose` get an airing, subjects associated with real or perceived maladies. It`s not all downbeat as one of my favourite tracks `It`s Too Cold Tonight` is shared, although the lyrics are, I have to admit, a little melancholic.

It was a real joy to watch the frantic audience jumping, singing and screaming every word to songs such as `Birdhouse`, Sundress`, `Always Focused`, `For The Sake Of Brevity` and `Feel Alive` as the in house security team help lift the flow of crowd surfers. This is while trying to hand out pints of water to the exhausted. The show closes out with a couple of cuts off the latest release with the compelling `Medicine` and the moving break up song `Vertebrae` which Dylan even thrilled us with his banjo solo. Marvellous.

The guys are cheered back for a one song encore with `Caution` from last year`s “Swell` album before taking their bows.

It`s pretty obvious that the trio started playing together in junior high and have been together since as the show is almost faultless. As I said in reviewing “breathe” Mattheisen`s vocals range from lovingly tender to loud, forceful and angry and they seem to lose nothing live.

This allows a nice balance to what are at times some wonderfully fierce hardcore submissions.

Previous article
CORMAC WINGS IT
Next article
BAND OF THE DAY: WALTARI