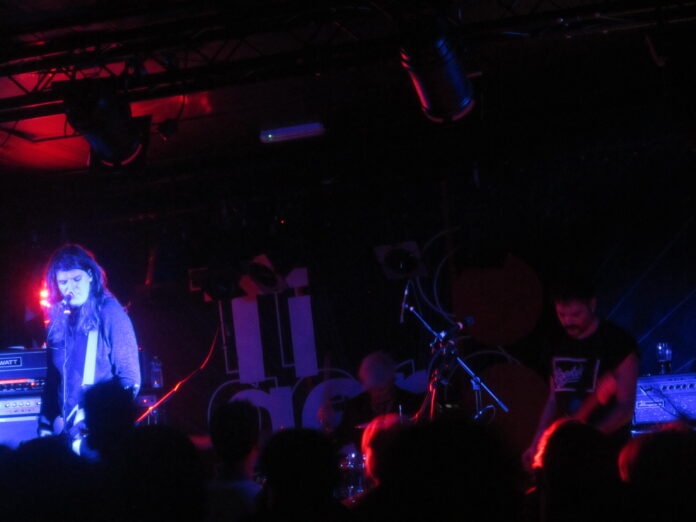 Taking a line from alternative metal band Staind “it’s been a while since I first saw you”, well four years since these guys supported Pulled Apart By Horses just around the corner in April 2017. They arrive in Brum on the home stretch of a fifteen date trek around the country with an absolutely stunning album `As Blue As Indigo` to promote which was released earlier this year.

The show is sold out and anticipation builds as we have some kind of Godzilla snippet then what I think is a Rage Against the Machine number fed through the pa as the band snake through the audience to the stage. The set opens with a blistering new number `L.W.G.F.U.` which singer and guitarist Jamie Hall has said is “about drinking, and that moment when despite my best efforts to abstain, my impulse always takes over and I say: ‘fuck it’ let’s go big.”

There`s a couple of tracks from the latest release with the driving `Sleepwalker` and pounding `Blue Mist In My Head` which was written about aspects of mental illness and has this frenetic audience clapping along. The quite dark `Omen` which for some reason always reminds me of the Deftones gets an airing before the edgy `Little Rope` with it`s quite disconcerting lyrical content, a delightfully Nirvana-esque number.

We have the slow burn of `Built To Fail` which is a heart breaking love letter to a departed friend before `Burning Effigies` which builds quietly before evolving into a pulsating rock out. `Memory Boy` is shared before Jamie demands devil horns from the faithful which almost to a man and woman they respond. `Serial Killer` and `Centrefold` allow us to catch our breath before the home stretch in which we have a few cuts off the last record with title track `As Blue As Indigo` and `In The Autumn Of My Years`

The guys close out with my favourite track `Stop Beating On My Heart (Like A Bass Drum)` a number that i`m sure Muse would have killed to have written and the scorching `Beauty`.

The stage lights are left on so we`re not sure if the fellas are coming back but alas they don`t and we all filter out in the bitterly cold night. I have to say it was a cracking show where all three members of the band Jamie Hall, Jimi Wheelwright and James Allix gave their all.

I loved the latest album so was wired to be able to hear some of the tracks from it in a live setting but I have to admit the band really breathed new life into some of the older songs as well.

There was a wonderful intensity about tonight`s sweltering performance and it does seem that the band are really coming of age. This Tigercub certainly has claws.