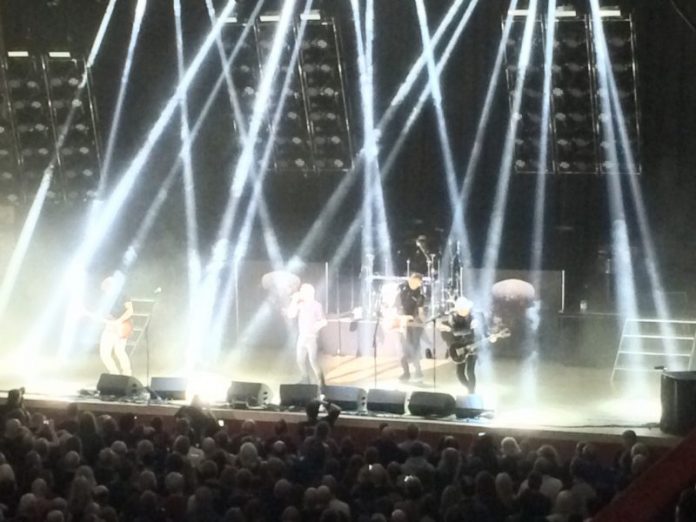 As Thunder play the seminal ballad “Love Walked In” tonight hundreds of mobile phones go up in the air to greet its opening chords. A thought strikes MV. When they first played this song, mobile phones didn’t exist.

And yet, the more things change and all that, because when they’d played their second song “The Enemy Inside” about an hour before, a woman in the front row whips her bra off and begins to wave it above her head. 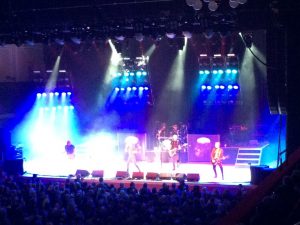 Oddly, those two rather disparate events sum up this evening.

First, few bands have endured in quite the same way Thunder have, and second, even this far down their road and – dare we say it – even at their age, they can get woman to take their clothes off just because they are onstage.

Both those things happen for the same reason. Thunder are an exceptional band with exceptional songs and they engender a bond with their fanbase that is nigh on unbreakable.

Christ, they’ve broken up Lord knows how many times. And they’ve always got back together. Why? Basically because the public demanded it.

Tonight’s hour and three quarters proves that they appear to have decided that future break-ups are all but pointless and they may as well get on with being Thunder. It is largely culled from their superb new record “Rip It Up”. More than half of it is played and it sounds fabulous. The lead track “No One Gets Out Alive” and the aforementioned “Enemy Inside” start things, its ballad “Right From The Start’  and the bluesy “In Another Life” belong right at the heart of the set and the title track is glorious let your hair down fun.

These are balanced with the odd trip down the road marked “nostalgia” – and rightly so, people love the songs like “River Of Pain”, “Back Street Symphony” and MV’s fave “Higher Ground” and the five understand their legacy. 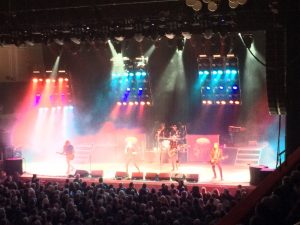 The glorious thing about Thunder is that they all have done or still do their own things, whether its bass man Chris Childs with Tyketto, drummer Harry James in Magnum and others, or guitarist Luke Morley’s projects and more, but when they come together there is an undefinable magic. Morley is one of the most underrated songwriters around, and his guitar playing is incredible here – as his solo in “Don’t Wait For Me” proves.

After cowbell a-go-go signals “I Love You More Than Rock N Roll” they return for a three-song encore, the downright saucy “Serpentine” is a welcome jazzy presence, “She Loves The Cocaine” is another cracker from the new album, before the end is exactly what you know it will be. But like that bit on Only Fools And Horses where Del Boy falls through the bar, just because you know what’s coming doesn’t stop it being wonderful.

And just as much as anything “Dirty Love” sums up why Thunder are and always will be magnificent. Frontman Danny Bowes – who still sings like God and dances like your dad – says: “we are at that portion of the evening that we have to do or else they’ll call the police” but whether they want to play it or not, it remains a fantastic song and he hams it up like he has to and soon the crowd are jumping up and down and waving their arms in the air. Just like every other time it has ever been played.

At this point Thunder know exactly what to do and they do it brilliantly. It’s not like they have to worry about being cool anymore. It’s not like they ever did. They’ve got their songs and their crowd and on a night like this there isn’t anyone better at this.