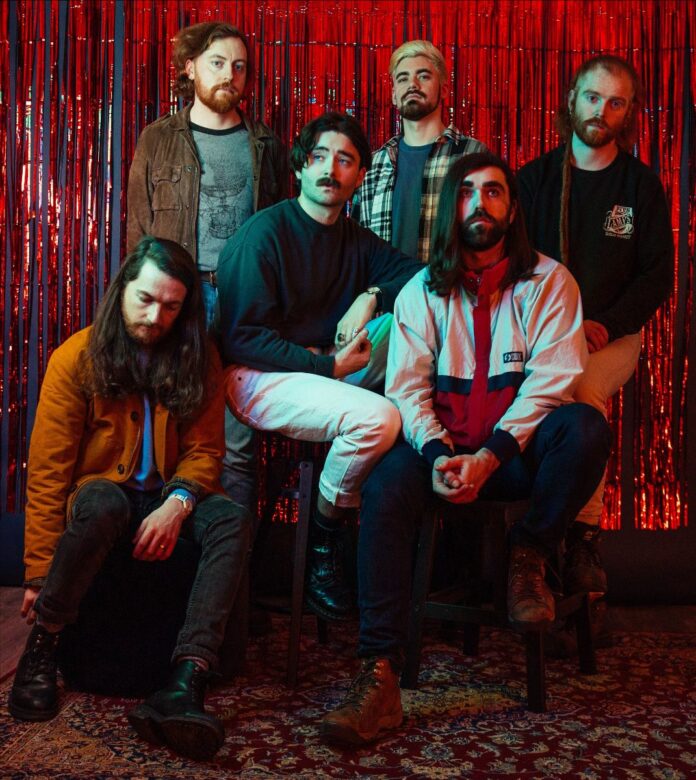 Irish noise-pop / post-punk sextet THUMPER have released their punchy new single ’25’. The track is the final single from the band’s debut album Delusions of Grandeur, released earlier this year.

Frontman Oisín Leahy Furlong comments: ‘”25’ is one of the first songs that we ever collaborated on as a unit, and the first time I felt like we had stumbled across a formula that was unique to us. It’s a fairly fretful and existential number, written when I was 24 about turning 25, recorded when I was 27 and released when I was 29… and the cosmic ballet rumbles on…”

’25’ precedes the band’s extensive tour of the UK, Ireland and Europe, which includes an appearance at Reading & Leeds Festival and a number of sold-out shows across Europe.

Delusions Of Grandeur has been championed by notable tastemakers The Line of Best Fit, GoldenPlec, BBC Radio 1 DJ Gemma Bradley and many more. Off the back of their debut album, THUMPER have received UK and international radio airplay on BBC 6Music, Radio X, KEXP and Kink Punt NL, and made TV performances on RTE’s Tommy Tiernan Show and Other Voices.

Over the last two years the Dublin six-piece have been developing their sound and building an increasingly passionate fanbase. With a line up of two drummers and three guitarists, THUMPER‘s maximalist wall of sound has long since set them apart in the booming Dublin music scene, and has them “punching like heavyweights alongside Fontaines DC and The Murder Capital” (Chris Hawkins, BBC Radio 6).

Delusions of Grandeur reveals THUMPER‘s trademark penchant for saccharine melody and unabashed hooks, all the while set against their signature psych-drenched rumble. This harsh juxtaposition of sweet and caustic is where THUMPER thrive.

While Delusions of Grandeur features plenty of homages to classic alt rock such as Weezer, Pixies or The Dandy Warhols, it is also steeped in the influence of contemporaries such as Viagra Boys, King Gizzard, Shame and even Idles at their most psychedelic. At other points the sheer bombastic nature of its production recalls Irish psych alumni My Bloody Valentine on Loveless, or no wave veterans Sonic Youth on Daydream Nation.

Delusions of Grandeur however is not just a statement of musical intent. The LP’s title refers to a struggle of self image, internal and external, and the existential maintenance that all of this implies. Frontman Leahy Furlong‘s visceral and surreal lyrics obsess over the search for the ‘authentic self’ in a medium so steeped in pretentiousness.

This central tension mirrors and challenges the chaos of light and dark in the music itself, as the record continuously swings from light hearted to brutal, keeping the listener hooked the entire time.