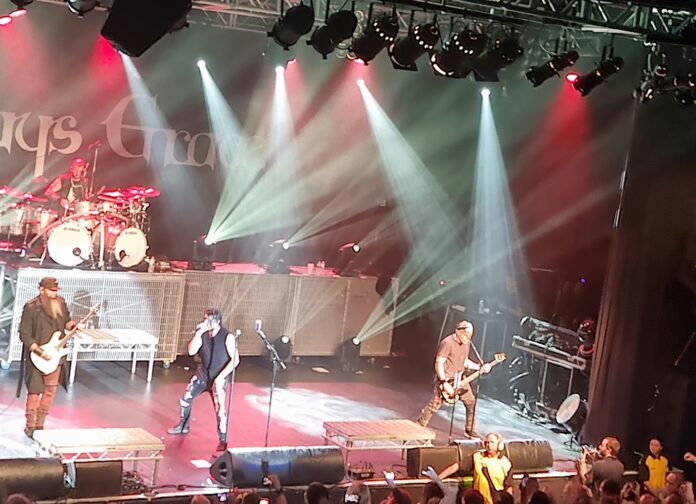 You can say what you like about 10 Years but never doubt the bravery of the Knoxville, Tennessee outfit. Not only do they take on “Heart Shaped Box” at one point in their set – they make it sound like they wrote it.  Infrequent visitors to these shores in their 22 years, 10 Years deliver a kind of potted history of why they’ve always been highly thought of. Big, thick rhythms and a sound that lurks in the shadows, “Russian Roulette” is typical of a set that is mostly culled from their mid-period. “Catacombs” – a choice cut from their most recent studio outing “(How to Live) As Ghosts” and “Fix Me” underline why this is such a difficult band to pin down, somewhere in the sweet spot between Seether and Tool, there they are. With a sound that’s their own. “Now Is the Time (Ravenous)” sees singer Jesse Hasek in the crowd, and there’s an energy to their show that is exemplified, perhaps by the new tune “The Optimist”. Just released, it indicates the forthcoming new record might be one to savour. “Knives” goes big on the Tool comparison, while “Novacaine” (another from “….Ghosts”) is as impressive as on the studio version. A phrase more apt here than usual, given the difference in personnel between live shows and recorded material. The last one “Wasteland” seethes with an anger too. Bubbling below the surface in all their songs it bursts forth here. Clearly anxious to make the most of the chance to play a series of shows overseas, 10 Years grab the opportunity by the throat. As impressive as fans of the band would ever have hoped, and impressive enough to make many new friends for sure.

When they do the anthemic (in fact its easier if you just assume all their songs are anthemic, it’ll save time) “Just Like You”, Three Days Grace invite a couple of excited audience members to join them. Many bands have done this over the years. Few, I’d wager get thanked by one for “saving my life” as happens here.

Three Days Grace are one of those bands. Huge stars back home in their native Canada and in the US. Back in the good old days they could count their record sales in the millions, but one that clearly has an astonishing connection with their fans. It’s rare you see anything like this.

A few months back they released the “Explosions” record, and “So Called Life”, its opening gut punch is delivered here. Matt Walst begins like he’s determined to get 1500 Brummies onside. He ends with them eating out of his hand. He’s a brilliant frontman of a modern rock band.

This is essentially an arena rock show done in a club venue. Their sound is huge. “Animal I Have Become” thunders and when Walst – his brother Brad on bass was a founder member along with guitarist Barry Stock and drummer Neil Sanderson – picks up the rhythm guitar for “Home”, the sound has a real metal edge.

“The Mountain” is particularly big in scope, and “Painkiller” is the first one they’d written when Matt joined the band. A live debut of “I Am The Weapon” (a standout from that new album) is delivered with a real energy, and its darkness – and indeed that of the lyrics elsewhere – is at odds with a jovial acoustic section, the highlight of which is Sanderson being roundly booed for calling football “soccer”.

Let’s be honest, they’ve played all around the world, they’ve had 17 number ones, sold 10 million records, so the four piece know how to pace a set. They do, spectacularly. “The Good Life” celebrates the good things, “Lifetime” is emotional, and “I Hate Everything About You” (next line “so why do I love you?”) is the perfect TDG love song.

“Never Too Late” ushers in the encore, a message of hope and positivity to anyone suffering with mental health issues (a cause you sense is close to their hearts) but “Riot” is even more simple: its rock music. Its one last middle finger. It’s one last great song.

Three Days Grace are sensational here. Perhaps even they were surprised at the reaction, it certainly seemed to give the show an extra level of energy and excitement. But however good the music was, it probably meant a lot more to many more and that is probably of greater importance to them. The sort of band for whom this matters, Three Days Grace are the standard bearers for modern North American hard rock.