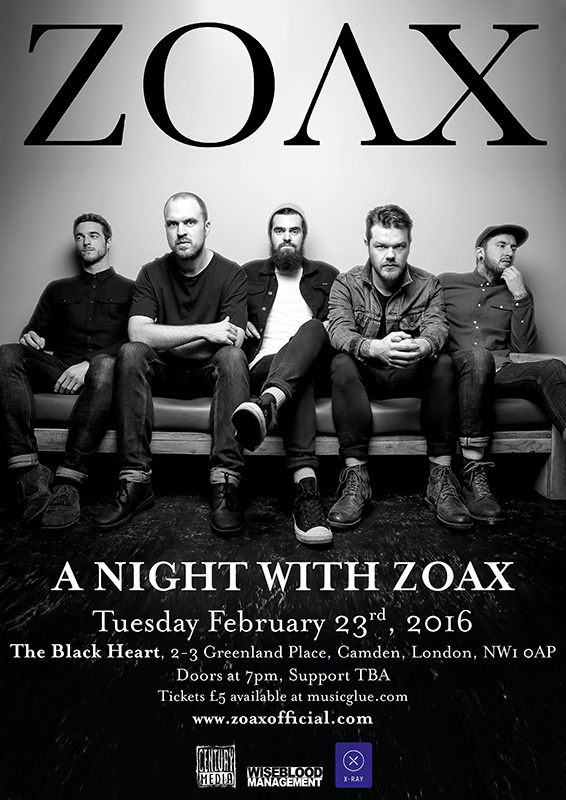 UK’s finest ZOAX are putting the final touches to their debut album. Deadpress.com featured them in the “50 Bands To Look Out For In 2016” list and wrote: “Equipped with a charismatic and well-dressed frontman in Adam Carroll, combined with music that can be both a strong contender on the mainstream radio whilst still inciting a mosh pit, Zoax have been poking on our shoulders for attention for some time now.” We couldn’t agree more.

The album will come out in late April, 2016. But before, ZOAX are proud to announce their appearance as special guests to FUNERAL FOR A FRIEND on their sold out ‘Last Chance To Dance’ final farewell tour. FUNERAL FOR A FRIEND are playing one very last run of shows, performing the album ‘Hours’ one night and ‘Casually Dressed’ the following, night alongside songs from their other records and EP’s. The tour package also includes the US metalcore originators SHAI HULUD. In case you didn’t manage to get a ticket, there’s another chance to see ZOAX headlining a special event February 23rd at The Black Heart in Camden, London, where the band will premiere a few new songs.

Formed in 2013, London-based ZOAX are a band set on creating music that inspire themselves in a seemingly stale and incestuous gene-pool. Still retaining the heaviness of their peers whilst infusing a broad focus on groove and melody, the 5 piece have succeeded in moulding a sound that sets them apart from the monotony of the masses. Feb 2014 saw the band introduce themselves to the world with debut EP, “XIII”. Wetting the palate of listeners, the release lead the band to its 2nd Download Festival performance and on to tours with Cancer Bats, Polar, Feed The Rhino and He Is Legend. Drawing from a wealth of live experience in previous bands such as Rise To Remain, Axewound, Burn Down Rome and Time Is A Thief, the young-group control a stage with the maturity and finesse of the old dogs. With a live show that combines neck-breaking ferocity with Dickensian charisma, ZOAX are quickly cementing themselves as a must-see live band.